In one of the more recent public controversies to hit the NCAC’s arts advocacy radar, two murals from a series commissioned for a Cincinnati Arts Center (CAC) exhibition were recently destroyed – one vandalized by unknown actors, the other whitewashed by a disgruntled site owner.

The two murals, by former street artist Shepard Fairey (whose best known images include the ubiquitous Obey Giant and the likewise ubiquitous Hope poster of Barack Obama), were commissioned by the CAC to be mounted in and around Cincinnati on the walls of buildings offered by their owners. However on May 18th, less than 48 hours after Fairey and his team had mounted one particular building-sized image of a child soldier with a rifle, building owner Michael Claypool had it whitewashed.  Said Claypool: “We had no clue what they were going to put up…we were not advised in advance. When it went up, we were the first to think it was offensive.” 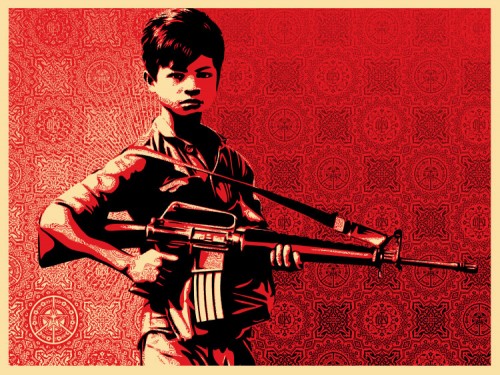 Among the justifications cited by those against the image of the child soldier was the presence of an elementary school across the street. Members of the community, including Claypool, also argued that property rights afford him the privilege of whitewashing to his heart’s content.

(In a second episode later that week, another powerful Fairey mural was anonymously destroyed shortly after it was mounted. Residents had complained about images of police with nightsticks and the phrase, “I’m gonna kick your ass and get away with it.”) 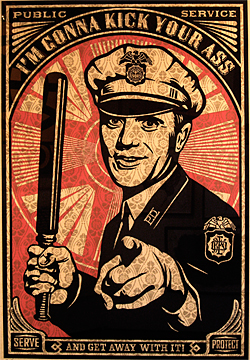 The NCAC deplores the destruction of public art and argues those who claim to protect children by censoring controversial images are misguided in their efforts.

A bit more detail is in order here. It turns out that CAC’s early outreach to potential mural hosts – who had to apply to host a mural in the first place – made quite clear that hosts would not have editorial input into the artist’s work and “would not have the right to modify the murals or remove them without written approval from the CAC before the Fairey exhibit closes Aug. 22…” (italics added). If he agreed to these terms at the outset, Claypool cannot claim a right to control the mural’s image; his destruction of the public displays amounts to little more than a vigilante form of censorship.

Moreover, the argument used to buttress the destruction of the mural – that the image was inappropriate because of its proximity to a local school – may be well meant but is misguided.  To ban images which contain guns or which comment on the existence of guns and war in the world threatens to silence important political speech, to which our society affords the highest constitutional protection. The ubiquitous images of guns and weaponry in our society (not to mention in the videos, games and news media that children consume), makes Fairey’s achievement all the more remarkable: he has managed to take images we all consume daily, to which we have mostly become inured, and reawakened their power to trouble, to provoke, to elicit a visceral reaction.  Rather than applaud the whitewashing of the mural, teachers and parents might have used it as a valuable teaching opportunity about war and how it affects children around the world.