A recent Intelligence Squared Debate at Yale took on the question of whether there free speech is under threat on American college campuses. After the event, The Atlantic's Conor Friedersdorf writes that the side arguing that there is no such threat are mistaken: "To perceive no threat is to ignore reality."

To sum up: free speech on campus is threatened from a dozen directions. It is threatened by police spies, overzealous administrators, and students who are intolerant of dissent. It is threatened by activists agitating for speech codes and sanctions for professors or classmates who disagree with them. It is threatened by people who push to disinvite speakers because of their viewpoints and those who shut down events to prevent people from speaking. Harper and Stanley were unpersuaded that free speech is under threat not because they defend speech codes or sanctions––both say outright at different times that they are for untrammeled speech––but because they are blind to the number and degree of threats to speech.

But one the participants in that Yale debate, Shaun Harper, wrote a piece for the Washington Post that protesters are just using free speech to speak up on issues they care about:

Black collegians are exercising their rights to speak out against racism and to demand more inclusive, less dehumanizing learning environments. The outrage about a new era of “political correctness” fails to understand how black students, faculty, and staff at predominantly white institutions have felt for centuries that their freedom to speak out against campus racism has been effectively suppressed.

Chris Marchese of the Foundation for Rights in Education (FIRE) has some thoughts about the relationship between free speech and campus social justice activism:

I understand why some students want restrictions on speech. The hurt and pain documented in the news is similar to the hurt and pain some of my friends felt in college. But these restrictions neither create more inclusive campuses nor make society more equal. Free expression, on the other hand, has enabled us to identify what’s socially just and advocate passionately for it, all the while keeping the door open to the next cause, unknown and unseen by us in the present moment. For the sake of social justice, we must protect free expression. 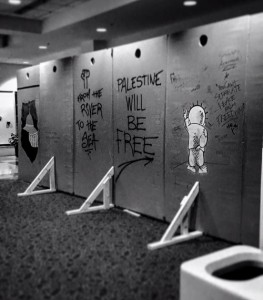 When students inquired about the confiscation, an administrator informed them that she had “consulted with relevant colleagues” and determined that the content of the wall was concerning, saying that certain “phrases and representations” are “likely to cause great offense.” Because of the “concerning nature of the content of the display,” she continued, “[the administration] cannot approve the wall being displayed again.”

Monday afternoon, Facebook notified Gore that she temporarily lost her Facebook privileges again. The notice said the ban would last for 13 hours, but she’s been locked out for three days and doesn’t know when Facebook will renew her privileges.

Ravi Perry writes in the Huffington Post about the controversy over screening a video about structural racism in a Virginia high school:

In Virginia, the Commonwealth's Board of Education Standards of Learning promotes a similar shockingly limited view on race in Virginia and American history. This is the type of exposure to race that students in Henrico County, Virginia received prior to my Black History Month program invitation. Hence, it is not surprising, that given the lack of curricular content on race, the school board and administration chooses to revert to the comfortable position of censorship: "School leaders have been instructed not to use the video in our schools. In addition, steps are being taken to prevent the use of racially divisive materials in the future."

Inside Higher Ed reports that McGraw-Hill has pulled a political science textbook Global Politics: Engaging a Complex World  over criticism of a map of Israel-Palestine:

The book features four maps of what is now Israel, Gaza and the West Bank and says that it shows "Palestinian loss of land" from 1946 to 2000. Many Palestinian advocates agree with the maps, but many historians and supporters of Israel strongly disagree and argue that the maps distort key facts, such as Jewish ownership of land before Israel became a country in 1948. Supporters of Israel have fought the use of these maps elsewhere and quickly urged McGraw-Hill to change or withdraw the textbook.