Previous Next
Hanover Students Stand Against “Beloved Bill” in Virginia 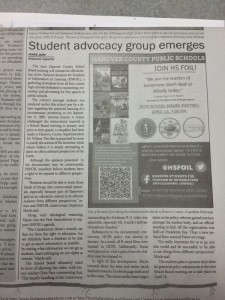 You may remember a little controversy in Hanover County, Virginia. Last January, the district implemented new policies requiring teachers to notify parents before using any materials in the classroom that might be considered "controversial." The move was prompted by complaints about the use of the film Thomas Friedman Reporting: Searching for the Roots of 9/11, which included Muslim perspectives, in Hanover High School in the fall of 2014.

The new policies have put what some consider a stranglehold on teachers and left a chill in the classroom, and led to the creation of the student-led group HSFOIL — Hanover Students for Freedom of Information and Learning. HSFOIL has been actively speaking out to the media and at school board meetings over the last year to urge a reversal of the policies and ensure academic freedom. Recently, their work has prompted a review by the district, but it's now been put on hold thanks to the passage of HB516 in the Virginia legislature.

HB516, which would require all schools in the state to send parental notification home about any material deemed "sexually explicit" and offering "nonexplicit" alternatives, now sits on Governor Terry McAuliffe's desk. With such first-hand experience on how rules like this can harm learning, HSFOIL sent the following to Governor McAuliffe:

The story of how HB516 came to be is eerily similar to the story in our very own Hanover County. A parent rejected the use of the book Beloved in the classroom due to a scene where a slave girl is raped by two school boys. While rape is yes, an extremely sensitive topic, it is still a real thing. We can’t continue to shield our students from the truths of the world in the fear of what? That they might get the wrong idea?

Let me ask: where is a student more likely to get the wrong idea—in the classroom, in a piece of literature, under a teacher’s supervision, or out in the real world, where no such supervision exists? Why not use education to our advantage? Educate students about controversial topics and discuss with them what is right and what is wrong. Give our maturity the benefit of the doubt for once!

Controversial materials greatly enhance a student's education, they do not hinder it. Allowing a vocal minority of parents to shield students from controversial topics hurts no one but the students themselves. Our students should be well-rounded and intellectually competent in all great works of literature, despite the “evils” the pieces might hold. Evils will exist in the world no matter if we shield our students from them or not, but it is much better for students to experience them for the first time in a book, rather than in real life.

If a parent opposes the use of an entire book, how is a teacher to assign continual alternative assignments? Teachers will be slowly waned from teaching sensitive material, eliminating them from the classroom as a whole. This is why HSFOIL urges the veto of HB516, and ask all those who agree to do the same.

You can contact the governor’s office to have your voice heard.