Previous Next
Fun Home Under Fire in New Jersey

UPDATE: The Kids’ Right to Read Project’s letter to Watchung Hills’ Superintendent is below.

This post was written by Patricia Mastricolo and originally published on the Comic Book Legal Defenders Blog on May 29, 2018. 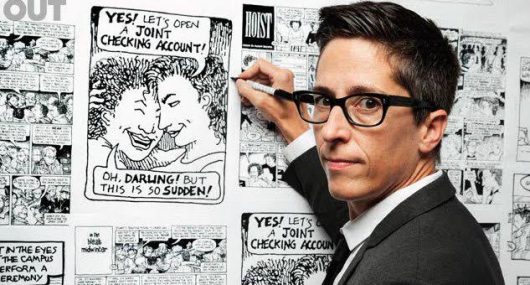 Fun Home is under attack again, this time in a New Jersey High School. Steve DiSturco and Mark Bisci, two parents of students at Watchung Hills Regional High School, want the award-winning graphic novel removed from the 12th grade curriculum due to “the sexually explicit nature.”

Alison Bechdel’s Fun Home is a graphic novel memoir of the author’s childhood, particularly focused on her relationship with her closeted gay father Bruce. As Alison grows older and realizes that she is a lesbian, she and Bruce are both forced to confront how his repression may have affected her own self-image and the way that she dealt with her sexuality. Time magazine named it the best book of 2006, describing it as “a masterpiece about two people who live in the same house but different worlds, and their mysterious debts to each other.”

The book was assigned to various senior English sections this spring, and DiSturco wants it removed from the curriculum before his child becomes a senior in the fall. He added, “We also don’t want children to be singled out, we feel that would not be in the best interest for children or the community,” referring to the opt-out policy for students who feel the work isn’t appropriate for them. DiSturco said he’ll do what’s necessary to prove to the Board that it isn’t just a few families who feel this way.

In an email to New Jersey’s Echoes~Sentinel, Superintendent Elizabeth Jewett said that while she understood the concerns both parents had, the work was chosen with careful consideration. “The curriculum was expanded to include a broad range of literature to reach all students, not just works that portray traditional gender and sexual identities. The expansion of the English curriculum is in alignment with the strategic plan and is the result of a two-year research process which included professional development for the English department staff.”

Jewett says decisions about curriculum “aren’t taken lightly” by the administration, and take into account multiple perspectives. These changes were inspired by messages solicited by Jewett from graduating students about their experiences throughout high school, and how things can be improved. After some students complained that the curriculum didn’t reflect the full spectrum of gender and sexual identities, Jewett took that feedback to heart.

“They said they felt marginalized because we were not more inclusive. So I just want you to understand that’s something that really resonated with me and really concerned me. I did not want students to graduate from our school having had an experience where they didn’t feel included in our school community.”

Mark Bisci asked what recourse was available to him if he wanted the book removed from the curriculum. Jewett suggested Bisci take up the issue with the department chair. “If there was a larger picture issue that you wanted the board or administration to consider, you’ve done that,” Jewett said. “The English department went through a very thoughtful process with regards to this. We have expected school- wide learning results that speak to our strides to develop empathetic individuals that graduate from the school that are accepting and embrace diverse students, cultures and backgrounds.”

School Board President Peter Fallon added that if Bisci still felt his concerns weren’t addressed after speaking further with the department chair, he could return to the Board and bring up the matter again.

The Kids’ Right to Read Project’s letter to the school’s superintendent is below. Click here for a full screen view.