Government Transparency Is Not a Partisan Issue: Eclipse of Sunshine Week

Previous Next
Government Transparency Is Not a Partisan Issue: Eclipse of Sunshine Week 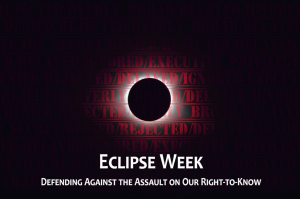 Since 2005 the National Association of News Editors has branded the third week of March “Sunshine Week.” It has served as the occasion for nonprofit organizations, media groups and libraries nationwide to draw together and celebrate successes achieved in the quest for a more open, transparent government.

But in 2018, Sunshine Week is looking less bright. The jubilations that had graced previous years’ celebrations have been replaced by dirges, and optimistic reports of genuine progress have been superseded by disappointing summaries of lost ground, unchecked abuses. Sunshine Week has been obscured by an eclipse.

For this reason, NCAC has cosigned a declaration opposing the powers keeping the American public in the dark.

In principle, I agree with this approach. Its bellicosity is appropriate, given the grave and pressing dangers facing free expression, the right to privacy and openness in American politics.

Fortunately if the game to be played is information warfare, i.e., a battle between fact and falsity, information vs. misinformation, what proponents of open government have to their advantage is that the facts are on their side.

There’s no shortage of historical and contemporary evidence showcasing the coercive obfuscation and obscuration of information perpetrated by establishment politicians and bureaucrats on both sides of the political aisle. Iran-Contra under Reagan, the rationale for entering the Iraq War under George W. Bush and Edward Snowden’s NSA surveillance revelations under Obama should suffice as demonstrative examples – and those are only recent cases.

Authority tends to court abuse no matter its political affiliation. Government transparency is not, and should not be perceived as, a partisan issue.

A Pew Research poll from May of 2017 suggests that public trust of the federal government to “do what is right just about always/most of the time” followed partisan lines in an unprecedented fashion when contrasted against long-term trends. Specifically, in light of the Trump presidency, Republicans’ trust in government following the election climbed 20 points while Democrats’ trust fell 20 points. These results display just one symptom of a larger problem plaguing American civic life: partisan polarization.

Americans are not only growing further and further apart from one another due to sectarian acrimony. We are also growing increasingly committed to the social mores and collectivist goals of our respective ideological camp.

As many have argued under Trump’s presidency, growingly fanaticized party loyalty in the political sphere can be turned against those who value and fight for government transparency, openness and accountability. Political affiliation can be used to blithely ignore accusations of opacity, much to the chagrin of truth-seekers but of little concern to loyalists of the faction of the accused. Blind eyes can be turned to justified, factual criticisms of secrecy, censorship and disregard for Americans’ civil liberties when such criticisms are deemed to have partisan motivation.

The open government community must therefore stand resolved to maintain its nonpartisan commitment to ending governmental and bureaucratic surreptitiousness – regardless of whether there’s an R or a D after a censor’s name.

We who are acutely sensitive to intrusions on our rights and liberties often assume that even a brief glance at the current state of opacity in our government and its federal agencies clearly demonstrates an ever-tightening and injurious strangulation of the American people’s privacy and access to information. But if those fighting for the rights of the public seek to inspire change in the mindset of millions in Americans – Americans who avoid acknowledging the culpability of their own party – it is increasingly necessary to set an example, bracketing out political assumptions so that they might follow suit.

We’ve got to agree to disagree on party politics, but agree to agree on calling a spade a spade, acknowledging that obscuring public knowledge is unacceptable no matter its faction of origin.