How I Became a Lit Activist: A 5-Step Guide

Previous Next
How I Became a Lit Activist: A 5-Step Guide

In November 2017, Katy Independent School District banned The Hate U Give, by Angie Thomas from library shelves. NCAC and its partners rallied in defense of the book and kids’ right to read it. But one Texas teen’s activism saved the day by collecting over 4,000 signatures in a petition to restore the book.

15-year-old Ny’Shira Lundy generously shared her story with us.

How I Became a Young Literary Activist

In the summer of 2017 I read The Hate U Give, a book that not only inspired me to be a writer like Angie Thomas, but also a community activist, like the protagonist, Starr Carter.

I knew instantly after reading the synopsis on the book jacket that I would have an instant connection with Starr. We both attended a predominantly white prep school, we’re both emotionally sensitive and we both struggled to find our voice.

Starr is a 16-year-old girl who witnesses her best friend’s murder by a white police officer. Though overwhelmed with emotion, she soon finds her voice and the courage to speak up against police brutality. I was inspired by her passion. After reading the book, I was inspired to follow my own passion for writing and write a novel that could change real world problems, the way Starr did. One that speaks on real issues in overlooked communities.

I’ll admit that when I first found out the book had been banned, I was absolutely enraged. You can admit you would be upset too, if you found out that a piece of art that has helped shape you into the person that you are had been restricted from other people.

I started a petition online, along with a letter asking the superintendent to return The Hate U Give to the library. Within three days of me posting the petition, I had gained 800 supporters! I also was featured on my local news and the author of the book tweeted my petition! *faint*

But for weeks, the superintendent did not reply. This made me feel as if I had to do something bigger.

So, I planned to attend the next school board meeting.

Shortly before the school board meeting, National Coalition Against Censorship called to let us know our petition had worked! The book had been placed back on the shelves and can now be checked out, though only with parental consent. I was ecstatic!!

I decided I would still attend the meeting and thank the superintendent. I was the only teenager there!   Two other adults spoke on why The Hate U Give shouldn’t have been pulled in the first place. The superintendent gave a LONG speech about how much explicit language was in the book. He also said that the book was racially insensitive. He said the school community elected him to keep the district “wholesome” and to make the final decisions for the district.

My blood began to boil. I thought about how not ALL students have “wholesome” lives. I felt he was missing the whole message of the book.

Finally, it was MY turn to speak. Though I didn’t particularly want to, I thanked the superintendent for placing this book back on the shelves.

“So just to be clear, you’re ok with the book being placed on the shelves with parental consent to read it?” he asked.

“Yes sir,” I replied. “But I also believe in intellectual freedom, and ONE parent who only read 13 pages should not be allowed to make a decision on what we ALL read.”

After the meeting, I received a lot of praise from my community and other literary advocates like the National Coalition Against Censorship. Good job!, they said.   That took a lot of courage.

I felt very accomplished — as if my voice was heard in reverb. Even Angie Thomas called me “the real Starr Carter!”

I wanted other young readers to feel like real-life Starr Carters, too. So, I started a virtual book club! I had an unbelievable amount of support! People were willingly donating me copies of THUG for my book club members. Even though my book club is new, I already have six regular members and special guests can join virtually. Even Angie Thomas herself attended! 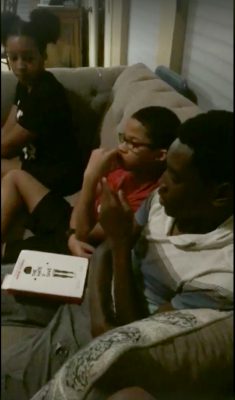 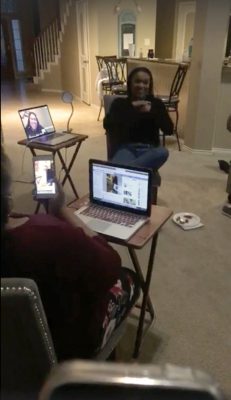 Our last book club meeting is on March 20th. I encourage everyone who hasn’t read The Hate U Give to pick up a copy and share – if it doesn’t awaken your inner activist, if might inspire another young activist in your life.