Is a Phallus a Firing Offense?

Previous Next
Is a Phallus a Firing Offense? 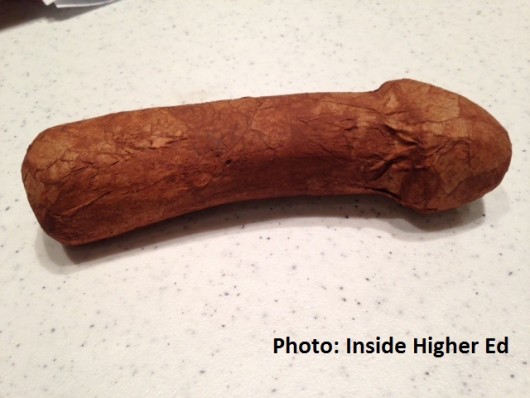 David Hillman was a popular instructor at St. Mary's College, a Catholic school in Minnesota. He's not employed there anymore—and it might be because of a prop shaped like a phallus.

As Inside Higher Ed reported, Hillman was put in charge of a production of Medea. Hillman's presentation

highlighted Medea’s undertones about greed, and suggested that cast members deliver admonishing lines about corporate greed while pointing fascina at the audience. Used in the ancient world in certain rites and to ward off evil, fascina are supposed to embody the divine power of the phallus.

Hillman and another faculty member say administrators called a meeting to express outrage over the 'profane' props.  Students got upset about the potential meddling with artistic freedom and the show went forward, but the props were swapped out for something less literal (and resembling "big bananas").

An article by professor Judy Myers about the play, which explained the historic use of phallus props in Greek theater, never made it into the student newspaper. A college vice president intervened, claiming that the piece "may stir up more response than we need. In fact it could alarm the conservative Catholic community."

But then the trouble really started for Hillman: A student involved in the production filed a sexual harassment claim against him. Hillman hasn't seen the formal complaint, but believes it relates to comments he made during rehearsals. He says that he advised the performers to move their bodies sensually, and at one point demonstrated being hit with a horse crop. He also believes there was a complaint about his explanation of gynomorphs, figures with both masculine and feminine characteristics.

How the college handles harassment complaints is a matter of controversy; as Inside Higher Ed explained,

As an adjunct professor, however, Hillman was in a very vulnerable position: the private college can refuse to his contract for any reason, which is what happened.

Hillman told the Star Tribune that the lesson was that "a group of students was stopped, was censored, and that for a brief moment, those students were able to see the value of free speech and, really, what free speech is all about."

For adjunct professors, who form an increasing percentage of faculty, the lesson is just as clear: Stay away from controversial material or risk losing your job. That is not a way to maintain an atmosphere of academic freedom on campus.