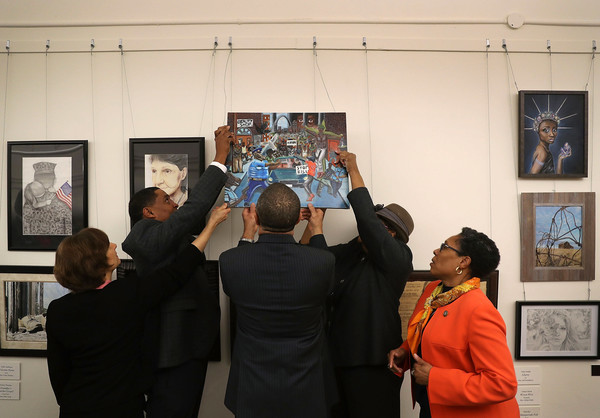 The controversial painting by student artist David Pulphus depicting a scene of protest against police violence in Ferguson, Missouri — and deemed "anti-police" by conservative critics — will not be immediately restored to the student exhibition in the U.S. Capitol Complex from which it was removed in January.

On Friday, April 14th, a federal court ruled against David Pulphus and his local representative, Congressman William Lacy Clay (D MO), who brought a motion for preliminary injunction to court, i.e. petitioned the court to re-hang the painting before the student exhibition closes in May. Pulphus and Clay claimed the painting was removed in violation of the First Amendment.

Back in January, NCAC and over a dozen other organizations issued a statement condemning the painting's removal, arguing that it constituted the silencing of a particular political viewpoint.

The painting was on view for six months without incident, along with roughly 400 other winning entries of the annual Congressional Arts Competition. Then, early this year, conservative media whipped up controversy over the painting's allegorical depictions of police with animal heads. Almost immediately, several Republican Members of Congress took down the artwork without authorization, causing a highly publicized tug-of-war over the painting. This was followed by the removal of the painting on the request of the Architect of the Capitol (AOC).

Since then, NCAC has been closely monitoring the incident as the lawsuit was filed against the Architect's decision and two of the nation's top constitutional scholars joined the case in support of the student artist.

In opposing the motion for preliminary injunction, the government argued that reasonable viewers would see the ideas in the artworks on display as sanctioned and endorsed by the government, as government officials had the final say over the work. Therefore, the paintings amount to "government speech." The premise behind the notion of "government speech" is that because the government is speaking on its own behalf, First Amendment rights pertaining to viewpoint neutrality do not apply.

The plaintiffs, on the other hand, argued that no reasonable observer would interpret the 400 student artworks in the exhibition as expressions of the government's viewpoint.

Public forum cases, like this one, are notorious for falling inconsistently on different sides of the government speech/non-public forum and limited public forum divide. Given that government buildings often open up their premises to art exhibitions containing work selected by independent organizations, the matter comes up frequently. In this case, as in others, one of the main questions is whether the government acted in a curatorial capacity to select the work.

The situation in the current case is rather complicated — even though the districts had their own juries, the AOC committee had final approval of the work. Reportedly, due to a technical framing issue, the AOC claims they never really reviewed Pulphus's painting in the first place and it was exhibited without approval.

In addition to the procedural complications, there is the problematic vagueness of the guidelines for the Congressional Art Exhibition, which were used to justify the removal in the first place. The guidelines require that "exhibits depicting subjects of contemporary political controversy or a sensationalistic or gruesome nature" be excluded from display. What is deemed "politically controversial" is, however, entirely subjective. Indeed, many other artworks in the exhibition could be deemed controversial, for example, a depiction of white police officers harassing an African American playing checkers. Indeed, that Pulphus' painting of police protests was singled out for a hasty removal demonstrates how the guideline could be abused to reinforce partisan political pressure, enforce bias and stifle speech.

The painting's removal shows a contemptuous disregard of a young person's civically engaged and passionate creative expression. It is deeply disturbing that government officials are using student artwork in a partisan battle, tainting a competition intended for students across the country to express ideas important to them. The message government is communicating appears to be that young people's opinions concerning such issues are not respected and don't matter.

On Tuesday, Representative Clay and David Pulphus announced that they plan to appeal the preliminary decision by D.C. Federal Circuit Court Judge John D. Bates rejecting their First Amendment legal claims, issuing a joint statement in connection with the appeal:

Our nation was founded on the very principle of freedom of speech, and there are few places where that core freedom warrants greater respect than the U.S. Capitol. That is why we are confident that the U.S. Court of Appeals will eventually vindicate not only our legal rights, but those of the American people. We believe our Constitution simply cannot tolerate a situation where artwork can be removed from the Capitol for the first time ever as a result of a series of ideologically and politically driven complaints.


NCAC will be following the appeal closely.