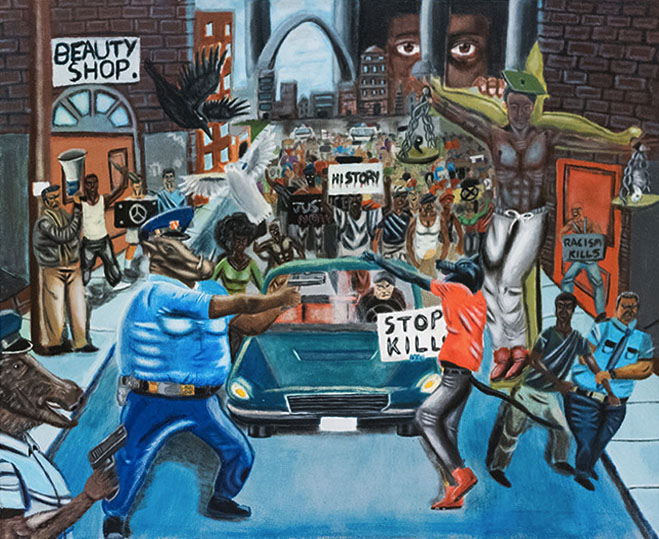 UPDATE 12/2/2018: On Friday (Nov. 30), the D.C. Circuit dismissed the lawsuit as moot because the 2016 art competition—and its corresponding Capitol exhibition have ended—so there was no longer any injury for the court to redress. In its opinion in Pulphus v. Ayers, the court rejected Pulphus’s arguments that the case continues to present a live controversy, finding the case moot.

UPDATE 3/9/2017: Two of the country’s leading legal professionals, Lawrence Tribe and Erwin Chemerinsky have agreed to work pro bono on Representative Lacy Clay’s lawsuit against the Architect of the US Capitol’s decision to remove a student painting from its display in the US Capitol in response to controversy surrounding its alleged “anti-police” message.

Lawrence Tribe is a professor of constitutional law at Harvard Law School and the Carl M. Loeb University Professor at Harvard University. Erwin Chemerinsky is the founding Dean and Distinguished Professor of Law, and Raymond Pryke Professor of First Amendment Law, at the University of California – Irvine School of Law.

The two Constitutional scholars will join Rep. Clay in arguing for the paintings restoration. Tribe said about his decision to join the case, “these flagrant and repeated acts of unauthorized government censorship threaten the very fabric of an open society committed to freedom of expression under the First Amendment. I couldn’t stand by and let that happen, so I agreed to help end the constitutional violation on a pro bono basis.”

Chemerinsky added, “One of the most basic principles of the First Amendment is that the government, when it provides a forum for speech, cannot exclude expression based on the viewpoint expressed,” an argument NCAC put forward in its letter.

UPDATE 2/21/2017: Congressman Lacy Clay announced today he has filed a lawsuit against the Architect of the U.S. Capitol arguing that the decision to remove a student painting that became controversial for its perceived ‘anti-police’ message was unfair, unconstitutional and made arbitrarily. The lawsuit is intended to protect the First Amendment rights of the artist, David Pulphus, and of every young American.

“[The decision] sent a chilling message to young Americans that their voices are not respected; their views are not valued; and their freedom of expression is no longer protected in the U.S. Capitol,” said Rep. Clay after filing the lawsuit. “This case is truly about something much bigger than a student’s painting, it is about defending our fundamental 1st Amendment freedoms which are currently under assault in this country.”

NCAC has reaffirmed its support Clay and its condemnation of the Architect of the Capitol’s decision.

NCAC and close to a dozen other organizations committed to defending free speech and the arts are condemning the decision of the Architect of the Capitol to remove a high school student’s painting that was part of an exhibition on Capitol Hill after it sparked controversy for its alleged anti-police message.

Last spring, David Pulphus, a St. Louis, MO high school student, was chosen as a winner in the annual Congressional Art Competition for an allegorical painting depicting a scene of protest against police violence. Along with works by 400 other winners, Pulphus’ painting was displayed in a public passageway leading to the U.S. Capitol building. Six months after the exhibition opened, conservative media began stirring controversy over its allegorical depictions of police. Republican lawmakers responded by removing the painting, without permission, and Representative Lacy Clay (D-MO), whose district Pulphus came from, restored the painting each time it was removed. Last week, NCAC issued a statement in support of Rep Clay.

On Tuesday, the Architect of the Capitol made a final decision, siding with Republican representatives who argued the painting broke the art competition’s guidelines forbidding works that depict “subjects of contemporary political controversy(…)” and removed the painting.

Rep. Clay, in a statement issued by his office in St. Louis, said the painting’s removal has “sent a chilling message to young Americans that their voices are not respected, their views are not valued, and their freedom of expression is no longer protected in the U.S. Capitol.” He promised to appeal the decision.

NCAC’s statement strongly condemns the removal of Pulphus’ painting, arguing that the art competition’s vaguely worded guidelines are being abused by representatives whose goal is to silence a particular political viewpoint.