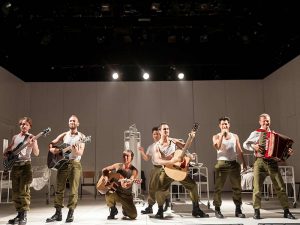 As organizations committed to free speech and an open public sphere, we fully support the decision of New York City’s Lincoln Center to proceed with its plans to host “To the End of the Land,” a production of Israel’s Ha’Bima National Theatre and the Cameri Theatre of Tel Aviv, in spite of calls for the play’s cancellation.

Those calling for the cancellation are not opposed to the content of the play but to its sponsorship by the Israeli government as a “strategy of employing arts and culture to divert attention” from the state's policies towards Palestine. While they have the right to protest the production—a right that we have defended—cultural boycott campaigns like this one are a blunt instrument that exacts a high price: sacrificing the free exchange of ideas about the most important issues of our times.

“To the End of the Land” is about the tragic entanglement between private lives, war and history in Israel between 1967 and 2000. David Grossman, on whose celebrated novel the play is based, is an outspoken critic of the Israeli government and a prominent peace activist. In his 2010 review of the novel, Colm Tóibín wrote: “To say this is an antiwar book is to put it too mildly. …There is a novelist’s notice taken of the sheer complexity not only of the characters but of the legacy of pain and conflict written into the gnarled and beautiful landscape… This is one of those few novels that feel as though they have made a difference to the world.”

Art relating to the Middle East is often controversial, whether because its politically sensitive content raises accusations of anti-Semitism—as was the case with the 2014 Metropolitan Opera production of John Adams’ “Death of Klinghoffer”—or because of the belief that any work receiving a repressive government’s support serves to create a national “brand” that promotes the country’s image.

The discussion spurred by controversy over the politically motivated state sponsorship of art is welcome, and the Boycott, Divestment, Sanctions (BDS) movement has done much to generate such discussion and to raise awareness about human rights abuses. It is unlikely that the cancellation of the play would contribute further to such awareness, while it is certain to deprive audiences of a deeper understanding of the human side of a tragic socio-political conflict.

Cultural institutions have a responsibility to maintain an open and lively cultural sphere by presenting a wide variety of perspectives even in the face of controversy and protest. Were institutions like Lincoln Center to yield to calls for cancellation coming from the BDS movement or elsewhere, any ensuing conversation would be much impoverished and further polarized. Therefore, we strongly support Lincoln Center in maintaining its integrity of purpose and its independence from political pressure.