UPDATE 12/19/2016: Winthrop University has dropped its threats to suspend or expel a student for an anti-lynching art installation after joint action from the National Coalition Against Censorship (NCAC) and the Foundation for Individual Rights in Education (FIRE). Samantha Valdez’s punishment will now involve putting together a panel to discuss race and the installation, and the completion of 32 hours of community service.

"Direct action can be hard to face, it highlights issues and can be unsettling, but censoring will only perpetuate hate,” said the Association of Artists for Change in an email. “Winthrop University has decided to use the event as an education opportunity, and have allowed the Association of Artist for Change a platform to education the community on race, art and the true history of Tillman.”

“We welcome Winthrop University’s decision to drop their unconstitutional threat of expulsion,” said NCAC’s Art Advocacy Program Associate Joy Garnett. “We are looking to support Samantha in using the proposed panel discussion to turn this incident into something positive: a teachable moment about the need for free speech protections in times of political and racial tension.”

South Carolina’s Winthrop University is threatening one of its students with expulsion or suspension for her involvement in an art installation protesting a university building’s controversial name. The National Coalition Against Censorship (NCAC) and the Foundation for Individual Rights in Education (FIRE) are defending the student's free expression rights.

Last month, a group named the Association of Artists for Change, made up in part by Winthrop University students, hung a series of nylon stockings shaped like abstract figures and filled with mud, on trees outside Tillman Hall, the university’s main building. They taped a piece of paper over the sign outside the hall that read “Tillman’s Legacy.”

According to the group’s spokesperson, Samantha Valdez, they intended the installation to draw attention to the violently racist history of Benjamin Tillman, after whom Tillman Hall is named. "Pitchfork Ben," who served as governor of South Carolina from 1890 to 1894, actively advocated for lynch mobs; 18 African-Americans were lynched during his four-year tenure. Valdez told the media that the protest artwork was designed to “ensure genuine emotion from the viewer” and to create an “aesthetic dialogue” about Tillman’s legacy. Tillman Hall has been at the center of peaceful student protests in recent months due to its namesake.

The university removed the installation immediately and is threatening Valdez with suspension or expulsion from Winthrop, citing disruptive and disorderly behavior and the production of “hurtful” images. 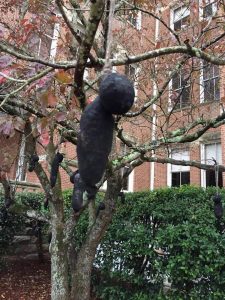 In a joint letter, NCAC and FIRE demand that Winthrop University drop Valdez’s disciplinary charges immediately, since they are disproportionate to her actions. Additionally, Winthrop is a public university, hence their actions raise serious First Amendment concerns. By moving to punish Valdez, the Winthrop administration runs the risk of chilling the speech of others who wish to voice their opinions on important issues publicly on campus. In doing so, Winthrop neglects its role as a ‘marketplace of ideas’ and also its responsibilities under the First Amendment.

The artistic representation of lynching is indeed controversial, intentionally so. As mentioned in an accompanying statement put out on social media by the Association of Artists for Change, their installation sought to “eliminat[e] the ability to forget the eighteen men who were lynched during Benjamin Tillman’s years in office.” They created the installation in the context of the long and well-known history of artists’ use of disturbing imagery to compel viewers to engage painful ideas and acknowledge disturbing histories and events. Parts of the campus community may have misinterpreted the work, but the way to remedy that is with more conversation about the meaning of the action, not by penalizing artists, thus chilling others from speaking up on important issues.