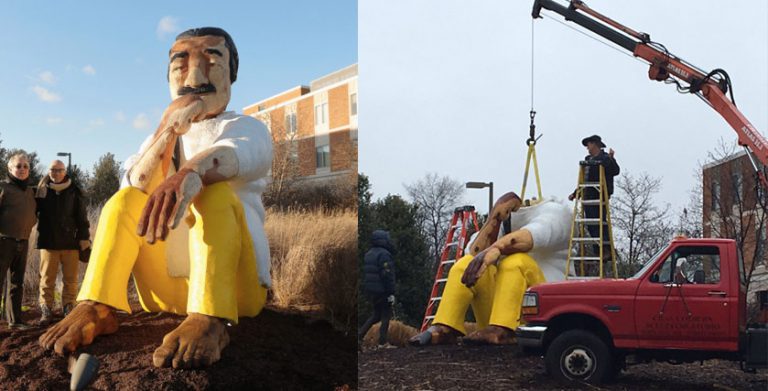 UPDATE 2/28/2018: Rigo 23’s controversial work has found a temporary home at The Main Museum in downtown Los Angeles. The work be will on view through May 13th.

UPDATE 2/16/2017: NCAC has written to the American University Museum and the Katzen Arts Center strongly recommending the implementation of clear policies to help avoid future controversies and fumbles in its curatorial decisions.

The letter underlines that the University’s concerns about the security of the artwork is not suitable justification for the supression of an artwork. Doing so emboldens those who wish to use threats as means of vetoing a work. The letter goes on to suggest that confusion around the instiutional position of the museum in relation to the artwork could have been avoided by implementing proper contextual materials around the artwork. It highlights that political artworks will inevitably draw backlash, some negative, some positive. The task for museums who host such works is to respond to the criticism while resisting pressure to compromise artistic freedom and free expression.

In early January, American University in Washington D.C. removed a sculpture installed in front of the AU Museum and Katzen Arts Center after reporting complaints and violent threats from outside groups, including an association of FBI officers,. The work had been scheduled to remain on view through April 30th.

The work, a 9-foot sculpture by California artist Rigo 23 is based on a self-portrait by incarcerated Native American activist Leonard Peltier. In the 1970s, Peltier was convicted of killing two FBI officers, though he has maintained his innocence and advocacy groups have questioned the legitimacy of the case against him. Peltier’s latest application for clemency was pending as this controversy unfolded and the installation of the sculpture was timed to coincide with International Human Rights Day, as well as with a symposium for the Peltier Defense Committee hosted by the University’s law school.

In a statement, the university justified its decision to remove the sculpture, arguing that “the subject matter and placement of the piece improperly suggested that American University has assumed an advocacy position of clemency for Mr. Peltier, when no such institutional position has been taken.” The University also expressed concerns for the safety of the artwork.

In the relation to the University’s first concern, the appearance of endorsement of the artist’s viewpoint, for an institution to exhibit a work of art is not to endorse it; rather, it is to fulfill its mission to provide a space where different viewpoints and ideas can be expressed. Suppressing an artwork is not a solution to the possibility of confusing the artist’s message with the institution’s message. Indeed the removal of Rigo23’s sculpture goes counter to the very mission of the American University Museum, which is to exhibit “political art.”

Indeed, there are many ways in which the Museum can frame the art – for example, through a press release, accompanying materials and programming around the work – so as to make it clear that the work only represents the artist’s position and not that of the University. Unfortunately by buckling to outside pressure and removing a work, rather than creating additional context around it, the University has set a bad precedent for working with artists who create political art, and for presenting exhibitions that deal with controversial subject matter.

As for the second concern, about threats to the integrity of the artwork, the AU administration somewhat incoherently took it upon itself to dismember the sculpture (possibly damaging it in the process) in the name of ensuring its safety. To date, the sculpture remains inaccessible to all, including the artist, in an undisclosed location. Aside from the irony of an act of destruction aimed at “protecting” the work, giving in to threats of violence opens the door to more threats, and security concerns, when used as an excuse to censor artistic expression, results in a kind of self-censorship that endangers cultural life. The University should have upped security for the work, rather than yielding to threats. By removing the sculpture AU administrators have pointed to a surefire way for groups and individuals to succeed in suppressing anything they disagree with: just send a threat of violence.