To Counter Book Censorship, Amplify the Voices of Young Readers

Previous Next
To Counter Book Censorship, Amplify the Voices of Young Readers 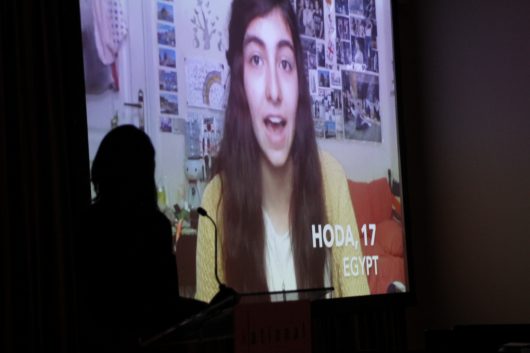 Last week, at NCAC's annual benefit, which honored three individuals for their crucial contributions to protecting free expression, there was one particularly moving moment.

In advance of the event, NCAC asked honoree Rainbow Rowell to solicit responses from her readers asking them to explain the significance of her book, Eleanor & Park, in their lives in light of the myriad efforts to censor the books in schools and libraries. NCAC then compiled a video montage of just a few of the hundreds of the responses we received:

In the audience was author and blogger Cory Doctorow, who, inspired by the event and the video, penned an essay on Eleanor & Park, that ponders the attitude of concerned adults in their efforts to censor a work like Rainbow's:

It's almost as though the adults who object to this book are ashamed to see their own attitudes rebutted so forcefully, and then seize on the pretext of "bad language" to object to it;

In describing the resonance of Rainbow's book, Doctorow writes:

[The] combination of factors — a biracial protagonist, a fat protagonist, an interracial romance, bullying, body shame, domestic abuse — means that this book speaks to young readers (and 45 year old dudes like me) in profound ways.

And in relation to the impact of the video montage on the audience at the NCAC dinner, he continues:

CEOs of giant publishing conglomerates, hard-fighting civil liberties lawyers, teachers, writers — every one of us misted up with that palpable demonstration of how literature — challenging, tough-minded, beautiful literature — can change young peoples' lives.

Doctorow's words capture the significance and value of books for young readers despite the controversial reputation they sometimes garner because of parental objection to content deemed inappropriate.

It is for this reason that NCAC's Joan Bertin and Millie Davis from the National Council of Teachers of English have collaborated on a project that asks several authors of frequently challenged books to share the responses to their work that they have received from young readers. Drawing on responses received by 8 authors, Bertin and Davis outline the recurring themes:

●    This book made me more empathetic, tolerant, and accepting, of myself and others. It helped me relate better to others and talk to them about things we never would have discussed otherwise.

●    This book made me realize that I’m not the only one with problems; it helped me feel more normal and less alone.

●    This book saved my life. It helped me confront a serious issue and deal with it.

●    This book turned me onto reading. It was the first book I ever read all the way though.

●    This book understood me the way no one else does. “I don’t know how I’d have gotten through adolescence without it.”

●    This book inspired me to want to do something with my life.

For example, in response to Ellen Hopkins' books Crank, Trick and Impulse, a series about the consequences of drug addiction, one reader describes how the books inspired her brother to stop abusing meth the day after he'd finished reading it.

In another response,  a girl named Rachel describes how books by Chris Crutcher (Deadline, Whale Talk, Staying Fat for Sarah Byrnes, The Sledding Hill and others) encouraged her not to take her own life:

You can read the full article for the entire list of books and responses here.

The NCAC and NCTE project exemplifies the message at the core of NCAC's Kids' Right to Read Project . As Bertin and Davis conclude, although adult anxiety over the impact of the materials their children access is understandable, more credit needs to be given to the children in their ability to discern the significance and lessons of stories that contain controversial elements. To address the concerns of parents, the voices of the people who are actually reading the books, and have gained something of value from doing so, need to be amplified.

"Young readers need challenging books to help them become empathetic, caring, knowledgeable, thoughtful, and mature adults," Bertin and Davis state. "They’ll tell you that themselves, if you just ask them."

This post will be updated as the NCAC/NCTE project continues to develop.