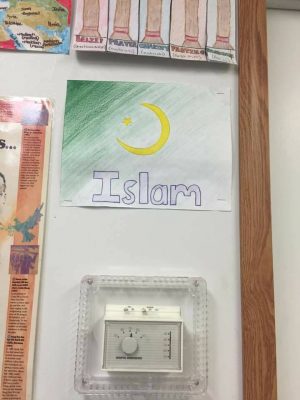 A parent in Sullivan County, Tennessee, has filed a formal complaint to her child’s school district in an effort to remove a social studies textbook that she claims “promotes Islamic propaganda.”

Michelle Edmisten, a founding member of the group Sullivan County Parents Against Islamic Indoctrination (SCPAII), which exists primarily on Facebook, believes the Pearson textbook, My World History, presents an inaccurate, indoctrinating picture of Islam. She has twice gone before the school board to present her concerns.

Edmisten first addressed the board on October 3, arguing that lessons in Islam violated her daughter’s religious beliefs. Her daughter refused to complete the lesson assignments– which included questions like "Name the Islamic Holy Book"– and was therefore given grades of zero. At the time, school board member Mark Ireson agreed with Edmisten and made a motion to remove the textbook. He said the textbook “does not represent the values of the country.”

Edmisten has since officially challenged the textbook's place in the social studies curriculum. Under Sullivan County policy, the principal of her daughter’s school has fifteen days to convene a review committee that includes librarians, teachers, parents, and possibly students. The committee will “determine the extent to which the [challenged] material supports the curriculum” and make a recommendation to the principal, who will make a decision.

The SCPAII Facebook page provides photos of some of the assignments that were cause for Edmisten's concern. In one, students were apparently told to make art projects containing information about Five Pillars of Islam. One commenter said, “My son won’t have to worry about insulin (sic) if I catch this crap in my house.” Another said, “Nope not gonna happen I don’t want my child learnin' this crap!!!” Both comments were liked by the SCPAII page, which also shares articles with titles like, "Top ten reasons why Islam is NOT the religion of peace," has labeled the Pearson Board of Directors "globalists" and has asked its followers to “speak to your churches.”

The Sullivan County controversy sadly reflects larger efforts to purge lessons on Islam from schools in Tennessee. The state Board of Education has recently drafted new educational standards that have largely redacte Islam from the curriculum. The proposed currciulum, which is undergoing public review, has removed information on the history and spread of Islam, the life and teachings of Mohammad, and the study of Islamic art. Lessons on other religion, like Chrsitianity, Buddhism and Hinduism, remain on the sylabus.

“It’s still part of history,” Susan Lodal, the Tennessee Board of Education's Vice President, said of Islam. "We’re just not teaching it to our children."

Stay tuned for further updates from the Kids’ Right to Read Program as we draft a letter to protest the potential removal of the social studies textbook.

To learn more about efforts to cenor education of Islam in American classrooms, visit our timeline of the trend.