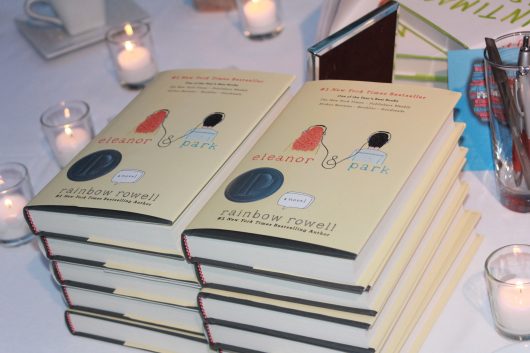 Rainbow Rowell's award-winning young adult novel Eleanor & Park has once again come under fire from parents concerned about the book's "appropriateness". The book was removed from an eighth grade curriculum in an Oregon middle school after local parents complained about its content.

Eleanor & Park is a coming-of-age novel, which deals with themes of love, race and social acceptance.

The Yamhill-Carlton School District in Western Oregon pulled the New York Times bestseller from a school lesson plan– without following the school's review process for book challenges– in January. The decision was made after parents complained about the presence of profanity and that passages in the book would encourage "bad behaviour." The school board met on Monday night to assess the decision.

School board vice-chairman Tim Pfeifer has apologized for not following the review process by not convening a review committee. However, he remains staunchly committed to the original decision. The committee that will issue a recommendation about the book's status will convene in March. The book has been removed from both middle school lesson plans and the high school library. It was never in the middle school library.

Teachers at the school have expressed concern at the administration's hasty pulling of the book, which threatens to undermine the authority of teaching staff in choosing materials for lesson plans. They have also expressed concern that parents are confusing fan-fiction based on the book's characters, something popular in online fan circles, with the content of the actual book.

NCAC is currently drafting a letter to the school district urging the review committee to return Eleanor & Park to the classroom. It will comdemn the school's disregard of its official book challenge policy because as we've argued elsewhere caving immediately to every parent complaint will leave entire curriculums in tatters.

The letter will also bring attention to the countless letters, video responses and emails NCAC received after we asked Eleanor & Park readers to express what the book meant to them. Rainbow Rowell was an honoree at our 2016 gala in November where a video compilation of several of the responses, from young people across the world, was screened. You can watch the video and hear about the book directly from its readers below.