Previous Next
Parents in Virginia Incensed by Arabic Calligraphy Lesson 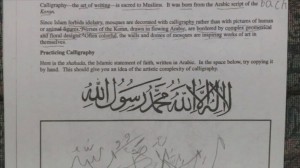 Schools in Augusta County, Virginia closed on Friday – not for a holiday, or because of a lack of heat, or an actual bomb threat, but because some parents are in an uproar that their children copied Arabic calligraphy.

Earlier in December students in a ninth grade geography class at Riverheads High School were asked to copy Arabic calligraphy to get a sense of its complexity as part of a unit on world religions. The calligraphy, from a standard teachers’ workbook called “World Religions,” happened to be the shahada. Students were not asked to recite it or translate it, and it was found to be in line with Virginia Standards of Learning for the study of monotheistic religions.

When some parents saw the assignment, they flooded the district with angry phone calls and messages claiming their children are being indoctrinated. Some took their children out of classes and called for teacher Charyl LaPorte’s firing, including Kimberly Herndon, who claimed that LaPorte “gave up the Lord’s time. She gave it up and gave it to Mohammed.”

By Friday, the district, which is refusing to fire LaPorte but is instead altering the assignment to include generic Arabic calligraphy, found the volume and vitriol of the calls too caustic for a safe learning environment, and shuttered schools for a long weekend.

NCAC supports the district’s inclusion of Islam in their study of world religions, and sent Superintendent Eric Bond our resource “Islam in the Classroom: Teaching About Religion Is Not Religious Indoctrination” to help fend off such baseless,  Islamophobic challenges. The community is rallying around LaPorte and the assignment. Let’s hope their voices – including the voice of reason – are heard.