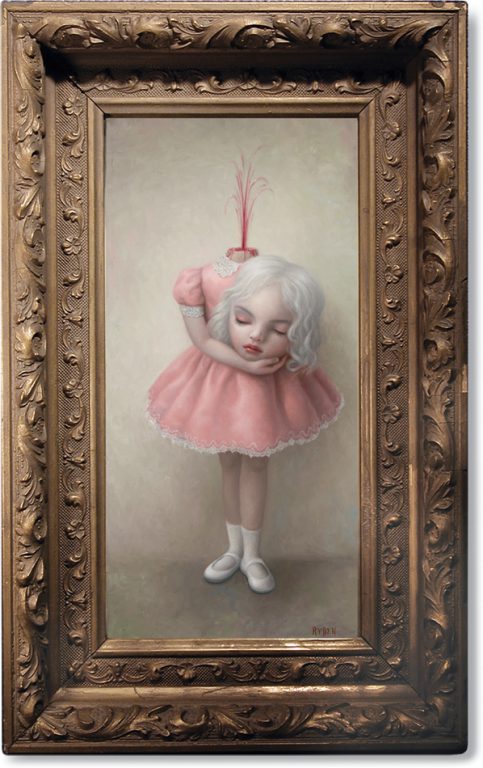 
In a replay of former New York Mayor Guiliani's attempt to grab attention by attacking "blasphemous" art, Ben Loyola, a member of the Virginia Beach Arts and Humanities Commission, is directing his ire against the work of LA-based painter Mark Ryden, featured in Turn the Page: The First Ten Years of Hi-Fructose, an exhibition that opens this Saturday at The Virginia Museum of Contemporary Art (MOCA). Organized collaboratively with Hi-Fructose Magazine, the show features works by fifty one artists who have appeared in the magazine’s pages over the past ten years.

Ryden’s work, once characterized in a New York Times review as an “unironic embrace of kitsch,” mines the noirish, carnivalesque themes of high Victoriana to give us his signature style Penny Dreadful in paint. The artist employs a well-established vocabulary where his protagonists, young girls reminiscent of Margaret Keane’s wide-eyed children, cavort with all manner of art historical and Pop references, including references to the occult and Christian symbolism. There are crucifixes and wounds, blood baptisms, nuns and devils. There are also frequent appearances by President Lincoln and pumpkin-headed presidents, stuffed bunnies straight from a Steven King novel, allusions to Alice in Wonderland and many many more. There is also an underlying charcuterie subtext that literally supplies the meat for many of these paintings. But the bones of contention are two of the three Ryden works included in the show. According to a report on WAVY-TV, Loyola found the works offensive, anti-Christian, and possibly pornographic.

The two works that offended Loyola are “Rosie’s Tea Party,” (below) and “Fountain” (see above), a diminutive painting of a girl holding her own severed head as she stands as if posing in a Victorian photo studio. Her pink dress and white shoes remain un-soiled by the thin spume of blood that spurts delicately from her neck stump into the air, like a decorative fountain in a formal public garden. Loyola characterizes the painting as “very anti-Christian and anti-Catholic. I was shocked to see this. She is holding the severed head, and blood is spraying up and showering her in blood. Is this what we are subsidizing at MOCA?" Since Loyola's impression of a girl showered in blood doesn't accurately describe the painting, one must assume that it is the product of his own fertile imagination. 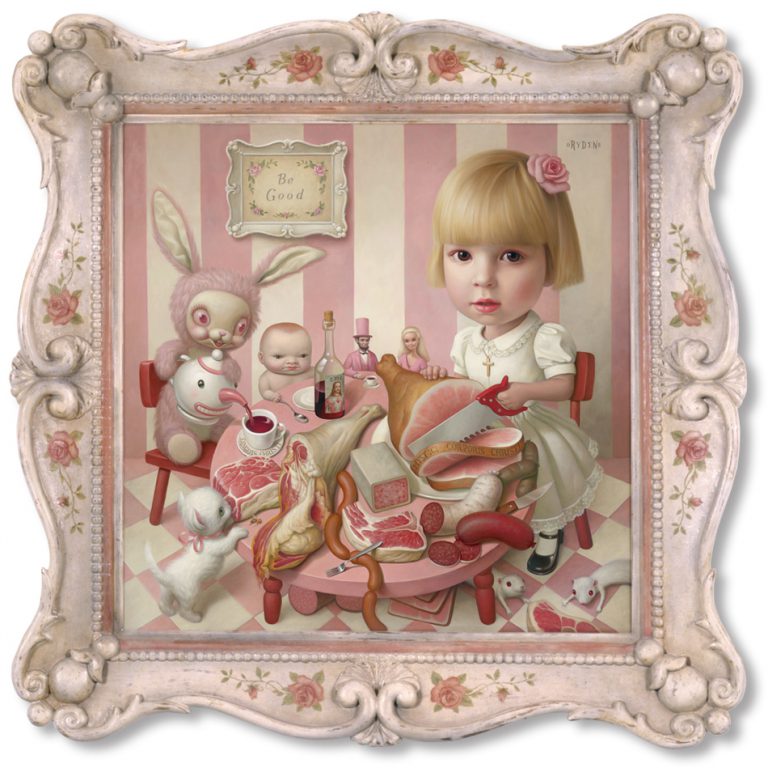 But, of course, Loyola has as much a right to his interpretation of the work as any other viewer. Art has provoked debate and controversy for centuries – and it continues to do so today. Indeed, as MOCA Executive Director Debi Gray has noted, sparking dialogue is essential to the mission of the museum – as it is to any contemporary cultural institution. Loyola is free and welcome to criticize and express his shock – what he cannot do, however, is use his position as Commissioner to impose his individual interpretation of an artwork on MOCA and force the museum to censor its programming.

While totalitarian and undemocratic societies have suppressed art and demonized artists, burned heretics and tortured dissenters, we are fortunate to be living in a country where the use of religious symbols in art, whether approved by church dogma or not, is protected under the First Amendment. The government cannot suppress real or imagined attacks upon a particular religious doctrine, nor can it suppress works of art said to be “offensive, sacrilegious, morally improper or dangerous,” even indirectly. Nor can Loyola use the power of the purse to discriminate against art based on the viewpoint expressed in it. Others have tried…and failed: In 1999, when prohibiting then-Mayor Guiliani from acting against the Brooklyn Museum for displaying a "blashemous" and "offensive" work, the court noted that, upon allocating a grant the government cannot punish or retaliate against a particular Museum because of the perceived viewpoint of the works in an exhibit by rescinding that subsidy.

Watch this page for developments.

Hyperallergic:
Virginia Arts Commissioners Threaten to Defund Museum Over “Anti-Christian” Paintings
by Claire Voon on May 20, 2016

"We (Paul Kasmin Gallery) fully support MOCA and the position of the curators Alison Byrne and Heather Hakimzadeh and their plan for the paintings to remain on view in the exhibition. We also endorse and appreciate the statements made by the NCAC."