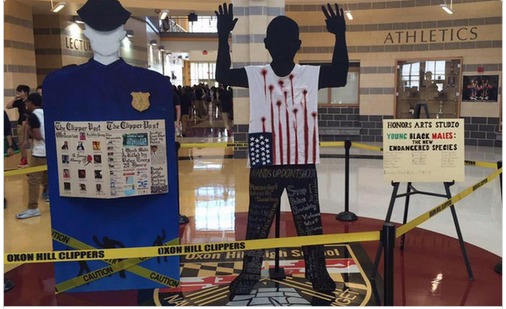 With high-profile police brutality stories making national headlines, it is natural that young artists would seek to confront these issues in their work. But outside pressure—often from police groups—has led some schools to curtail student speech and artistic freedom.

A March student exhibit at a local mall in Gretna, Louisiana included a piece featuring an image of a police officer and the text "Join the Force & Get Away with Murder." According to one news account, the school made sure it "was removed once it was brought to their attention."

While the source of the complaint was not clear, in other cases police officials were the ones criticizing art they deemed offensive or unflattering. At Oxon Hill High School in Prince George's County, Maryland, the Honors Arts Studio put up an installation that tackled issues of police brutality and racial profiling.

As we described it at the NCAC blog:

A mannequin painted white dressed in a blue uniform with a badge on the left chest. Attached to the torso of the mannequin is a newspaper that reads “Obituaries,” accompanied by photos of recently deceased black men and statistics about police brutality. To the side of the mannequin is a silhouette of a person with their hands up. The figure is wearing a white t-shirt painted on it are holes dripping red paint pooling in an American Flag.  On the silhouette’s lower body are written expressions pertaining to their shared anxiety of police brutality: “Stop Racial Profiling” one reads.

But the piece was removed from the rotunda a few days before its planned de-installation, after the school received a complaint from the local Fraternal Order of Police, which offered this critique: "To say the display was distasteful would be an understatement."

Oxon Hill students, though, spoke up in support of free expression. They held protests on campus demanding that the school board express support for student free speech, and that "a process be implemented that allows students to appeal decisions that concern curriculum and censorship in schools." 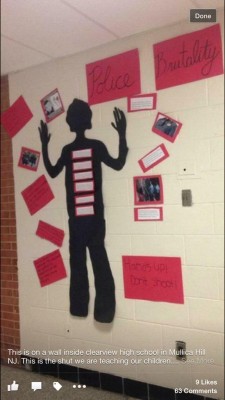 A similar dynamic was at work at a school near Camden, New Jersey, where a display focusing on police brutality and community relations was taken down after complaints from the local Police Benevolent Association. As NCAC reported:

The display, part of an awareness campaign project in Clearview Regional High School’s humanitarian studies class, featured a silhouette of a person with raised hands and posters stating statistics on crime, brutality, and police in the community. It was, one student said in an interview, meant to converge the ideas that police are society’s protectors, yet are still human and are not infallible. The project does not, students note, defame the police or cast them in a negative light.

Clearview's principal decided the display should be removed because the criticism of the project was "causing a disturbance." He also stated that the controversy "raises the need…to reevaluate our formal policies on class projects." As in Maryland, students at the school have actively protested the administration's censorship. 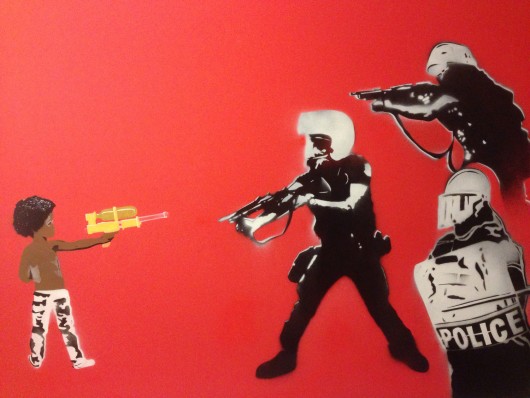 But outside pressure doesn't always win out. In another New Jersey town, a student art show that included work addressing police brutality drew intense criticism on social media, and even made it to the Fox News Channel. But the show went on, and Westfield Schools superintendent Margaret Dolan attempted to defuse the controversy by releasing a statement stressing that "information that has been passed along via social media and elsewhere has not told the entire story" of the art show. And last month in Madison, Wisconsin, local police groups strongly objected to the installation of a piece titled "Don't Shoot" at a local library, saying they "find this publicly-sponsored art display both offensive and indicative of terribly poor judgment." But they did not request the painting be removed, and the library held its ground.

It's understandable—and predictable—that confrontational art will be offensive to some individuals or groups. And they are well within their rights to explain how or why a particular work offends them. But the most valuable lesson that school officials can teach students is how to manage that dialogue without resorting to censorship.