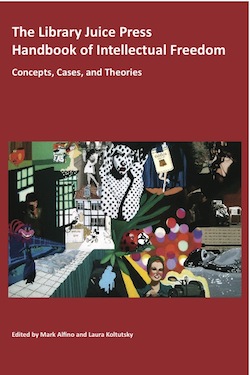 We’re excited about the just-released Library Juice Press Handbook of Intellectual Freedom because, in addition to being a landmark resource on the state of free inquiry and expression, it features a new essay by NCAC’s Svetlana Mintcheva on censorship, past and present, in the arts.

Library Juice talks about the need for this handbook on their blog:

You can order the Handbook from Amazon. Svetlana’s essay explores how censorship within arts institutions can manifest in many ways, while the topics being silenced are “stunningly consistent: sex (including nudity), commentary on religion, and political content.” We have provided an excerpt of Svetlana’s essay here as a preview. Enjoy!

The Impulse to Censor

On an otherwise peaceful October afternoon in 2010, a woman armed with a crowbar entered the Loveland Museum/Gallery in Colorado and smashed the plexiglass case holding a multi-panel lithograph that collaged various images from popular culture and religion. As she reached in and ripped out the work, the woman was screaming: “How can you desecrate my Lord?” The lithograph, by Mexico-born artist Enrique Chagoya had become the subject of controversy because, among multiple other images, it collaged a pop image of Jesus Christ with a drawing of the body of a woman engaged in a sexual act. However, as it was displayed in a city owned gallery, the First Amendment had so far protected it from the censorious zeal of a city councilman and local church groups.

A few months later, in April 2011, two unidentified men entered the Yvon Lambert Collection in Avignon, France, and attacked American photographer Andres Serrano’s 24-year old photograph, Piss Christ, with screwdrivers and an ice pick. The vandalism followed a protest against the exhibition led by the Civitas Institute and other organizations dedicated to “defend[ing] the honor of the Son of God”.

Such acts of violence against inanimate objects tell us something about the power of images to arouse strong emotions, which include the desire to suppress, or even destroy them. Periods of iconoclasm, when images are destroyed on a massive scale in an effort to eradicate the dangerous symbolism they contain, recur through history and invariably accompany shifts in political and religious power. Long before the Taliban blew up the images of the Buddha in Bamiyan Valley in 2001, King Hezekiah purged the Temple of Jerusalem of idols and destroyed Moses’ bronze serpent; early Christians destroyed sculptures of the Roman gods; Protestant reformers attacked Catholic statues; Pueblo Indians burned and destroyed crucifixes in their war against Spanish colonizers; and the Soviet revolution destroyed churches. Less than a century later images of Soviet leaders were themselves destroyed, proving that secular political idols can be just as hated – and potentially dangerous – as religious ones. Political power battles find both expression and additional fuel in attacks on symbolic objects.

The classic image of censorship is, indeed, that of officials in power physically destroying books and art in public rituals: It could be Savonarola’s so-called Bonfires of the Vanities in 15th century Florence, where “immoral” books, paintings and art were cast into the bonfire along with other “sin-producing” objects like mirrors, cosmetics, fine dresses, playing cards, and musical instruments; the actions of Anthony Comstock’s New York Society for the Suppression of Vice in late 19th century U.S.A., eloquently represented in the Society’s seal, whose surface is split between an image of a man being thrust into a jail cell and another of a man in a top hat casting a book into a bonfire; or the ritualistic Nazi book burnings of the 1930s.

This kind of dramatic grand scale censorship accounts for a very small fraction of the work suppressed today. Regimes of wholesale overt censorship do exist but not as part of developed democracies, which all hold freedom in general and freedom of speech in particular, as core principles. And nowhere is freedom of speech as cherished a principle as it is in the United States. The First Amendment of the United States Constitution prohibits government officials from suppressing speech based on the viewpoint it expresses. While initially interpreted to protect mainly political speech (hence Comstock could attack “obscenity” undisturbed), the interpretation gradually broadened to the point where today the First Amendment protects entertainment as well as the press, images as well as words. Artistic expression, whether in film, painting, or even video games, conveys views and opinions and thus participates in the democratic marketplace of ideas.

As a result of broad constitutional protections the heavy hand of government rarely falls directly on artistic expression, yet subtler forms of censorship are ubiquitous. New incarnations of censorship resist being identified as such and may, indeed, fall outside the legal definition of censorship, which is limited to public officials discriminating against viewpoints. If a private entity – be it an Internet intermediary like Google or a private museum – removes a work of art from its virtual or real walls, this is not censorship in the eyes of the law. Neither is the removal of public funding from an arts institution censorship under the law unless there is a direct and proven link between the funding decision and the suppression of a particular viewpoint. Nevertheless, both private acts of suppression and the political manipulations of the public purse strings have constraining effects on artistic freedom. As discussed later in this chapter, they can be even more efficient than direct government censorship in forcing both artists and art institutions to censor themselves.

This is not to say that government has entirely surrendered its role as censor. As we shall see, government officials are not always aware of their responsibilities under the law and often misidentify their actions as being sensitive to community values or protecting children rather than recognizing them as the suppression of objectionable ideas, i.e. censorship. Moreover, the First Amendment does not protect all speech. There is, indeed, no country today where free speech is an absolute. Obscenity, child pornography, defamation and libel, incitement to violence, and threats are all refused the mantle of constitutional protection in the U.S. Unfortunately, it is sometimes hard to draw a clear line between protected and unprotected material, which tends to lead down the slippery slope of self-censorship.

Multifaceted as the censorship of art is in its methods, its targets are stunningly consistent: sex (including nudity), commentary on religion, and political content. I will focus on each of these in turn, tracing the various manifestations of censorship in each category. I will then cast a critical eye on a compromise solution art institutions tend to use so as to deflect calls for the removal of artwork because it offends someone: the warning label. No essay on art censorship today would be complete without mentioning money, the market and copyright law and their joint effect on artistic freedom. Alongside these relatively new neo-liberal modes of constraining artistic freedom, I will briefly note some current-day incarnations of that oldest of censorship techniques: vandalism. Throughout I use the word censorship not in its narrow legal sense, but according to its common dictionary definition as suppression of speech considered objectionable by anyone with the power to do so.