Previous Next
Reclaiming the Native American Swastika Symbol: An Interview with Steven Leyba

In August, Artspace, a non-profit organization that manages spaces around the country where artists live and work, ordered the removal of an exhibition from the lobby of its property in Everett, Washington. The exhibition contained works by one of its residents, Steven Leyba, an artist of Native American and Jewish descent. Some of the works in the exhibition featured the swastika symbol, which Leyba has worked with for over thirty years to reclaim its original significance in Native American culture. NCAC wrote Artspace a letter demanding a public apology and restoration of the artworks, arguing that removing the work gravely compromises their commitment to artistic freedom.

In the meantime, NCAC sat down with Steven Leyba to find out more about his work and his approach in reclaiming this potent symbol. 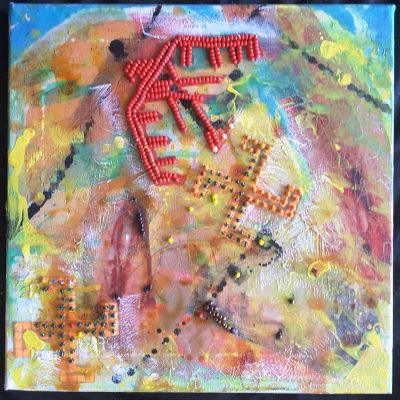 NCAC: Tell us a little about yourself as an artist. What artists were influential to you and what events and experiences have had an impact on your work?

Steven Leyba: I have always drawn and painted since I was a kid. I was very shy and it was my way of interacting with the world and making sense of it. My dad, a bearded, eccentric automobile mechanic, introduced me to hippies and bikers and people that did not play the game of following every social rule: basically, outlaws and radicals of southern California in the 1970’s, the peak of California’s golden self-discovery, and empowerment movements. By the early 1980s, I was in art school. I needed to find my own unique way to express how I see the world.

Around that time, the Bay Area was on fire over two things: the Robert Mapplethorpe exhibition at UC Berkeley, and Anton LaVey, who started the Church of Satan in 1966 (the year I was born). I had been fascinated by him since I was 16. Up through the 1990s, there was still the Satanic Panic hysteria, and Satanic Heavy Metal music was going mainstream. LaVey became a huge influence for me.

The Mapplethorpe exhibit taught me that human sexuality was a legitimate subject for art. In fact, it was the most important subject of the last part of the twentieth century. Performance artists like Karen Finley and David Wojnarowicz explored uncharted aspects of human experience. Radical artists using the human body, even their own, had brought back figurative art.

By then, I was getting into my heritage as an American Indian, and I wanted to explore that from a political point of view as a contemporary artist. And I wanted to live in New York, as I was witnessing incredible activist art, like with ACT UP, and I realized that much of the creative class was going to be wiped out by AIDS.

The two artists who had the most influence on me were the Swiss Surrealist H.R. Giger and the Beat writer William S. Burroughs. Giger purchased many of my works that are now on permanent display at the H.R. Giger Museum in Gruyères in the Swiss Alps. Burroughs wrote an introduction for my book Coyote Satan Amerika, published by Last Gasp books. We had an ongoing correspondence, and he invited me to visit him in Lawrence, Kansas. This made such a lasting impression on me. 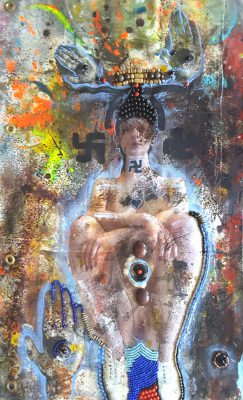 NCAC: How did you first come to the idea of reclaiming the symbol of the swastika, which you have now been using in your work for almost thirty years? What is your approach to using the swastika?

SL: I have been drawn to the symbol since I was a kid. I remember getting annoyed when other kids would start talking about Nazis because I didn’t see it like that, I knew it as the Whirling Log of life, a symbol of well-being and good luck. I had seen it on American Indian blankets and pottery, and in books. The symbol is thousands of years old. I was annoyed by the official, western, white worldview of the symbol that ignored us Indians and the people of Asia. I decided to start using it in my work in the early 1990’s, beading the Whirling Log on bead looms and gluing it onto pages in my handmade books. Later, I began to use it and the beadwork as a painter would. I was not merely interested in using the symbol in a traditional way, I wanted to experiment, bring it into my way of working, and to use the symbol in new ways as I felt a contemporary artist could and should. It also made me happy, it honored my ancestors.

NCAC: What other contemporary artists and craftsmen/women also work with this symbol and are there any with whom you feel a kinship?

SL: I love its use by contemporary Native artists, especially the Navajo weaver Melissa Cody. There are also many tattoo artists all over the world who are known for their work with it in tattoos, and you see the swastika used in wonderful ways by Japanese and Chinese artists.

Another artist I have had an affinity with is Canadian artist ManWoman. I first discovered his work in the late 1980’s in the Bay area when I was going to art school, in a book called Modern Primitives. It inspired me also because here was this artist who was part Jewish, like myself. He started getting tattoos of various swastikas from all over the world. He also amassed the world’s largest collection of swastikas from every culture he could find. It includes Coca Cola good luck swastika key chains. 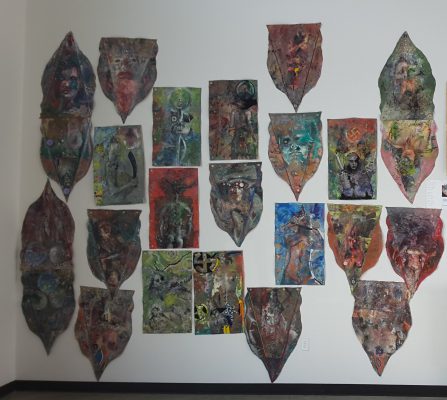 NCAC: Describe the reactions to your work in the show that was removed from the Artspace lobby.

SL: I recently exhibited pages from my handmade book, We Are All Indians Now, which I created during my first two years at Artspace. Some of the pages contain painted or beaded swastikas. The show coincided with the opening of the city’s month-long Art Walk and was up for five days before it came down. I didn’t get negative reactions from other tenants directly, nor did I hear of any complaints. Lots of tenants praised the show and came to the opening. Three young local artists were so excited that they hung out for most of the opening, even invited me to their open mic later that night. They also told me how inspiring my work was and how it was giving them ideas for their art.

Then I got an email from Artspace telling me I had to take down the work because it was “discriminatory” towards other tenants and was in violation of my lease. It was the first I’d heard of this. I have displayed paintings with swastikas in the common areas of Artspace for the entire four years I have lived here without a problem.

I said I would comply, under protest, and that we should continue the dialogue. But as soon as the work came down, they vanished and ignored my emails.

Live-in management asked individual tenants if they were offended by the swastika, but this has made a hostile environment for me to live in. Forcing the art to come down sent the message that I am guilty of something. So I am hearing “Red Nazi Jew” way too many times in the hallway.

NCAC: Do you think the current political climate may have shifted the reception to your work that incorporates the swastika?

SL: Yes, the national narratives used by both the Trump administration and the mainstream media are part of it. It becomes very personal, as close friends who are artists and have supported my art and use of the swastika for decades have now gone silent.

In my experience, I have only had white people get upset about the swastika in my art. Why is that? Why do they feel the need to police the symbol and get offended on behalf of people of color? None of my fellow Jewish friends have ever gotten offended by any of my art or performances with the swastika.

Not a single person has given me a single believable, valid reason to not use the swastika or display my art that has swastikas in it.

In the end, I am creating art from this.