Previous Next
Texas Day of Action 4/26: Fight for Ethnic Studies! 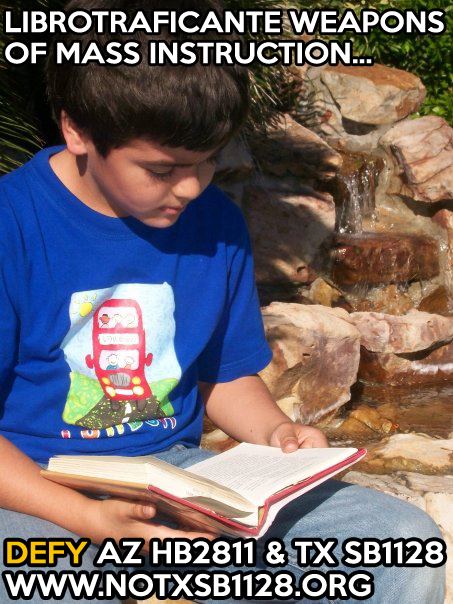 Right now the Texas state legislature is considering a bill that would require college students to take the equivalent of two semesters of “courses providing a comprehensive survey in American History” in order to graduate. One of the two semesters could be Texan History. The new bill is evidently a “reinforcement” of a 1971 law mandating students take six hours of American history.

It also follows on the heels of a January 2013 report on U.S History courses at Texas A&M and UT by the National Association of Scholars, “Recasting History: Are Race, Class and Gender Dominating American History?” Spoiler: their answer is yes.

Sen. Dan Patrick has defended his bill, saying that “the simple purpose of SB 1128 is to be sure that our core curriculum in history represents a comprehensive understanding of our history in areas of the economy, politics, war and other significant events that have helped shape our past and who we are today.”

While not an outright ban, the bill signifies an unnecessary level involvement of legislators in matters of curriculum and serves to restrict education and exploration by boxing out ethnic studies. There is a real fear that if such courses no longer count toward degree requirements in the state of Texas, enrollment will drop, courses will be cut, teachers moved around to teach mandated survey classes and the subjects will decline.

As UT Austin stated after the NAS report was published: “The report attempts to isolate race, class and gender as something distinct and separate from other areas of study, when in fact they are intrinsic to these other areas.”

The question of what students should be required to learn at the university level is a tough, legitimate question. The value and drawbacks of a broad survey course could and should be debated by educators, academics and students. Such a course certainly could be constructed in a comprehensive way, focusing not only on “economy, politics, war” as Sen. Patrick would prescribe. But that is not within the scope or aim of state legislators or this bill.

Stand up with Los Librotraficantes and other activists on Friday, April 26 in Texas and beyond and spread the word! Learn more here.