Why is this artist’s work “too controversial” for an art center exhibition?

Previous Next
Why is this artist’s work “too controversial” for an art center exhibition? 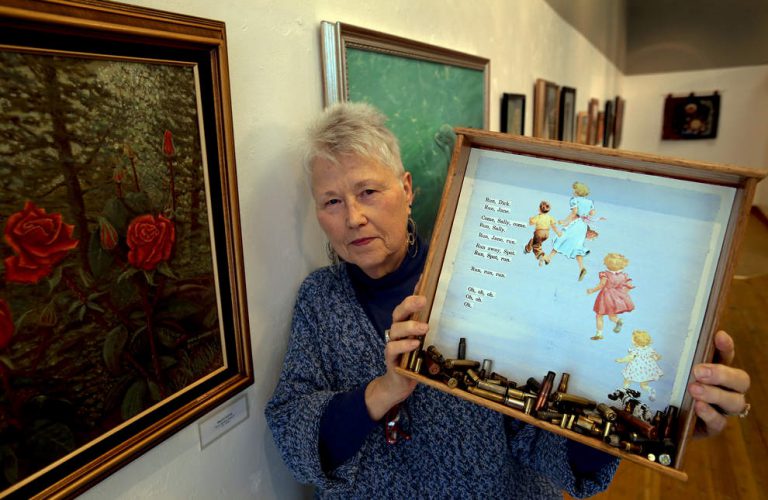 As a dues-paying member of the Emerald Art Center in Springfield, OR, Linda Cunningham prepared a piece of work for the monthly members’ show. The “pastoral” works of other members were accepted without incident, but Cunningham’s three-dimensional piece was deemed “too controversial” and rejected by the executive board of the Art Center, according to The Register-Guard.

The piece conveys Cunningham’s response to recent school shootings, in particular the tragic shooting in Newtown, CT in December 2012. It features Dick-and-Jane-type illustrations and wording in a frame filled with used ammunition casings.

Though her first reaction was dismissal of the board’s action, now Cunningham is speaking out against the action of the board: “This is just plain censorship. At first I got mad, and then I tried to laugh it off. Then I thought, ‘Wait, this is important to me — this is censorship of my art.’”

Naturally, representatives of the art center do not feel the decision constitutes censorship (hint: they never do), saying instead that the exhibit “tries to steer away from controversy.” Case in point, the rest of the art is tame: “Everything else in this show is much more mild — very pastoral,” said art center coordinator Paula Goodbar.

The art center, as a private entity, may choose what it displays, but as Cunningham pointed out, her piece did not even violate the center’s policy on “inappropriate” works. Inappropriate meaning, in this case: “denigration or hate of religion, race, creed, national origin, sex or sexual orientation; graphic or offensive nudity; explicit sex; promotion of terrorism or violence; and offensive bodily function related art.”

The problem is, galleries are becoming more and more gun-shy when it comes to artwork that is anything other than purely decorative.  Art that conveys ideas that people care about would inevitably bring people to respond: this is what art is supposed to do! The Center is doing a disservice not only to its members but to ts own position as a relevant
cultural institution by limiting the work permitted to be put on display to rosebuds and hedges. How pleasant.