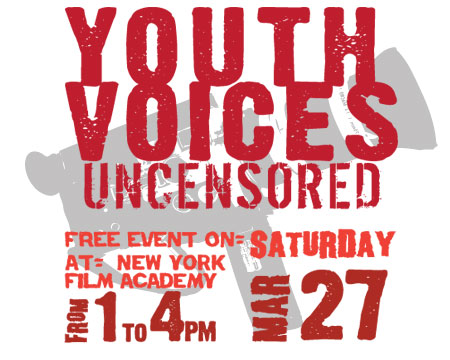 Join us at the New York Film Academy for our second Youth Voices Uncensored event on March 27th from 1-4pm for an afternoon of youth films, fun prizes, and great performances! Meet the winners of the 6th Annual YFEN film contest and make connections while exploring the power of youth-media. It’s FREE and open to the public!

What: NCAC screens winning films from the Youth Free Expression Network’s film contest “Free Speech in schools (Does it Exist?)”, and several youth films from Reel Works and Global Action Project. Hip Hop poet Kahlil Almustafa performs his poetry as part of the celebration. A conversation with the filmmakers follows the screening.

Tickets: Free and open to the public