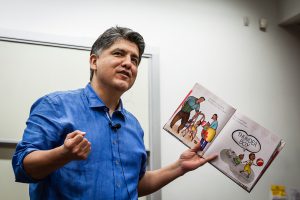 UPDATE 8/16/2017: After two months of deliberation, on Tuesday the Conejo Valley Unified School District voted to include Sherman Alexie’s The Absolutely True Diary of a Part-Time Indian in the 9th grade English curriculum.

The Board Trustee, Mike Dunn, who had spearheaded the campaign in opposition to the book, citing graphic and “pornographic” content, was the only person to vote against its inclusion.

NCAC had previously written to protest the Board’s decision to delay action on the proposed curriculum, arguing it would set a precedent for the success of future book challenges that place objectionable content over pedagogical merit. We also published an opinion piece in the Ventura County Star arguing that placing cautionary labels like “pornographic” or “sexually explicit” on books – a proposal suggested by Dunn — damages the quality of a school’s education.

New York, NY, June 22, 2017- The National Coalition Against Censorship (NCAC) and 8 other organizations committed to defending youth intellectual freedom are urging a California school district to include an award-winning novel, The Absolutely True Diary of a Part-Time Indian, in a ninth-grade curriculum after objections were raised about the book’s language. The groups underline the harmful precedent refusing to include the book will have on future book challenges, and note that several other informal requests against valuable literature have followed this initial challenge.

Earlier this month, the Board of the Conejo Valley Unified School District (CVUSD) schools in Thousand Oaks, CA, delayed action on the English/Language Committee’s proposal to include Sherman Alexie’s Part-Time Indian in the 9th grade core literature curriculum. The move was prompted after a Board Trustee raised concerns about the book’s language. Part-Time Indian, which tells the story of a Native-American teenager, has won numerous accolades including the National Book Award for Young People’s Literature, and has been praised for its deft exploration of themes including race, poverty, bullying, and identity.

The group’s letter states that to unduly delay a vote on the book because of the subjective objections of an individual Board member privileges the opinion of one individual over the parents and community members who do not object to the book’s content and want students to have access to intellectually stimulating literature. By choosing to remove the book, a precedent is set for the success of future book challenges that place objectionable content over pedagogical merit. The letter notes that modern literary classics, including Khaled Hosseini’s The Kite Runner and J.D. Salinger’s The Catcher in the Rye, have since been challenged in a district high school’s core literature curriculum over concerns about sexual references.

“The mere presence of offensive language or adult content provides no justification for removing pedagogically valuable literature from school curricula,” said NCAC’s Youth Free Expression Program Associate Abena Hutchful. “Otherwise, students would be denied access to many timeless classics, from works of Shakespeare to The Lord of the Flies, which include profanity or sexual references.”