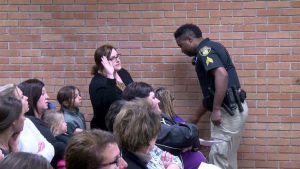 The National Coalition Against Censorship (NCAC) has written to Louisiana State Superintendent of Education John White to demand a public apology be issued to Deyshia Hargrave, a teacher in Vermilion Parish who was unjustly removed from a school board meeting and, subsequently, unlawfully arrested. No charges were filed against Ms. Hargrave.

In addition to Ms. Hargrave herself deserving an apology, NCAC’s letter argues, her students need to see that the State of Louisiana respects the First Amendment, including the right to protest and to speak against perceived injustices. This incident received significant national media coverage, including disturbing video, which students in Vermilion Parish undoubtedly saw. Ms. Hargrave has proven herself a dedicated teacher, community member and citizen and her treatment both undermines her authority with her students and sends a distinct message that dissent will not be tolerated. This must be corrected, for both Ms. Hargrave herself and the good of her students.

Ms. Hargrave spoke out at the Vermilion Parish school board meeting on January 8, 2018 to voice her opposition to the district superintendent receiving a raise in his latest contract when teachers and other district employees have seen wages stagnate for several years.

We hope that the Louisiana Department of Education will do what is necessary to reassure the state’s citizens that their First Amendment rights will be protected.

NCAC’s full letter to Superintendent White can be read below. Click here for a full screen view: