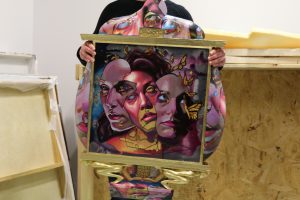 Alison Stinely, an artist in Norfolk, Virginia, had her exhibition abruptly canceled by its host, Hampton Roads Transit (HRT), just days before it was scheduled to open. Stinely’s art had been approved for an exhibition by Norfolk Arts, which works with local businesses to place art exhibitions. The work was subsequently accepted for display in the Transit Gallery, which sits within HRT, a public agency. Throughout the application and approval process, Stinely provided images of her work, which includes male and female nudes.

In response to the cancellation of the exhibition, the National Coalition Against Censorship (NCAC) wrote a letter to HRT urging them to establish a clear set of guidelines with Norfolk Arts governing the artworks to be displayed in the Transit Gallery in order to avoid First Amendment violations going forward. The letter reminded HRT that, as a government agency, HRT cannot arbitrarily reject work because some individuals dislike it. The Transit Gallery functions as a designated public forum where any restrictions must be viewpoint-neutral. Banning nudity on the basis of complaints made by a few individuals who find it offensive is clearly viewpoint-based censorship. Developing clear guidelines for exhibitions will help HRT avoid arbitrary viewpoint censorship of artists.

Citing a “vitriolic” response to the removal of Stinely’s work, HRT has now canceled its partnership with Norfolk Arts, announcing it would not host any future art exhibitions.

Joy Garnett, NCAC’s Arts Advocacy Program Associate, says, “It is unfortunate that Hampton Roads Transit, an agency that describes itself as ‘dedicated to being a valued community member’, is closing its doors to artists just because an artist has spoken up for her free speech rights. By closing its space, rather than remain open to the beauty that local artists can offer and the variety of ideas they represent in their artwork, HRT is depriving the community as a whole of the value of artistic expression. And all because a few employees find the sight of the human body, that age-old subject of art and admiration, shameful and intolerable.”

The full letter sent to HRT can be viewed below.