UPDATE 8/1/2017: House Bill 527, North Carolina’s “Restore/preserve campus free speech” legislation, became law on Monday. The governor declined to either sign or veto the bill. It was promoted by Republicans in the General Assembly and by Lt. Gov. Dan Forest.

Read about NCAC’s opposition to the bill below. 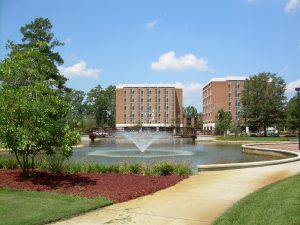 NCAC and the American Association of University Professors (AAUP), are urging North Carolina Governor Roy Cooper to veto a bill that aims to “restore” and “preserve” free speech on college campuses. While NCAC and AAUP support free speech and academic freedom on every campus, the groups argue the legislation places an unnecessary burden on universities and runs the risk of partisan political interference in university affairs.

HB 527, dubbed “Restore/preserve campus free speech,” would require North Carolina universities to take punitive measures against protesters who “disrupt the functioning” of the university or who “interfere with the protected free speech of others.”  Prompted by the trend of student protesters disrupting controversial speaking arrangements at universities across the country, the North Carolina bill is the most recent in a string of bills being introduced and made law in several states. Although the provisions in the bills vary from state to state, they are all based on a model provided by the Goldwater Institute, a conservative and libeterian think tank.

The North Carolina bill requires the University of North Carolina system (UNC) to create a ‘Committee on Free Expression,’ led by the legislature-appointed Board of Governors, to report to the public about the success of the bill and current threats to free speech on North Carolina public campuses. It also mandates freshman students attend classes during orientation about free speech rights. The bill passed the Senate last week and is now on the Governor’s desk.

NCAC and AAUP argue that the bill will create more problems than it solves, burdening universities with provisions that existing free speech protections already account for. The letter underlines that North Carolina universities enjoy robust protections under the US and North Carolina constitutions and that UNC institutional policy ensures “appropriate opportunities for the expression of all points of view.” A mandate for a Board of Governors-established ‘Committee on Free Expression’ also risks undermining institutional autonomy over a university’s affairs. Recent events attest to the potential of political pressure interfering with academic issues such as curricula and reading list selections.

“By allowing a state-controlled body, the Board of Governors, to pass judgement on the state of campus speech, there is ample ground for concern that decisions would be made along partisan lines,” said NCAC’s Youth Free Expression Program Associate Abena Hutchful. “Instead, we ask the governor to sponsor a collaborative and university-led campaign to review and implement the best existing free speech policies at institutions state-wide.”