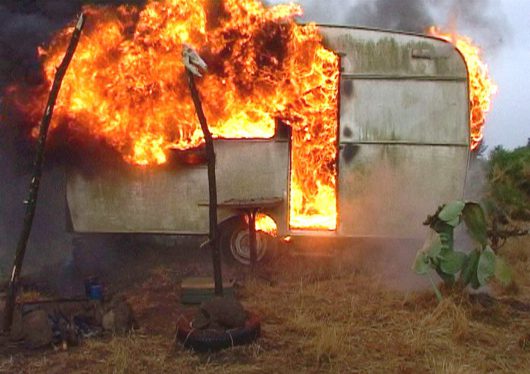 Last week, the Walker Art Center’s opening of a traveling retrospective of artist Jimmie Durham’s career, titled Jimmie Durham: At the Center of the World, rekindled a longstanding debate over the authenticity of Durham’s Cherokee heritage. The discussion has brought to light the enduring lack of representation of Native artists in the art historical canon, in art museum exhibitions and in the collections of leading institutions. However, it has also shown us a way forward.

The Durham retrospective is the second controversy involving the Native American community to unfold at the Walker Art Center this month. The first, involving Scaffold, Sam Durant’s sculpture about capital punishment, sparked protests among Minneapolis’ Dakota community who felt blindsided by the presence of the monumental gallows in the garden and the cruel history it evoked. In that instance, the artist and the Walker quickly acquiesced to protesters’ demands to dismantle the sculpture and to allow Dakota elders to ceremoniously burn it, a decision that drew criticism from NCAC and other organizations.

Fortunately, the retrospective has not garnered protests or demands to remove Durham’s work. However, the debate around his ethnicity brings us face to face with an important issue present in both controversies: the glaring exclusion and underrepresentation of Native artists in US museums. With regard to the Walker Art Center, this is an omission especially painful to Minneapolis Native artists, considering that the Walker is located deep within Ojibwa and Dakota lands.

The good news is that, this time, the Walker reached out to Native artists and members of the Minneapolis Native community prior to the opening. And in an initial meeting, a decision was made to adjust some of the language describing the artist’s identity in publicity materials. In a subsequent meeting between curators from the Walker and the Hammer Museum, and local Native artists and curators, it was decided a disclaimer was to be placed on the Walker’s exhibition webpage and beneath the introductory wall text of the retrospective. It reads:

While Jimmie Durham self-identifies as Cherokee, he is not recognized by any of the three Cherokee Nations, which as sovereign nations determine their own citizenship. We recognize that there are Cherokee artists and scholars who reject Durham’s claims of Cherokee ancestry.

Minneapolis artist and curator Dyani White Hawk was encouraged by the meeting and its outcome, stating that the Walker’s decision to reach out and discuss is a step forward in ensuring a seat for the Native American community at the decision-making table, in turn improving the representation of Native American artists.

She said, “I did leave feeling like they were genuinely, actively listening and concerned… Hopefully this is a turning point. Hopefully the institutions that are involved in this will become more connected to Native artists, Native scholars, Native writers and professionals, and those connections will be built and hopefully there can be a more longstanding relationship with our communities through this experience.”

As we expressed in our statement responding to the Sam Durant controversy, cultural institutions should not have to sacrifice artwork so as to appease protesters. Rather, what is needed is to address the underlying problems, in this case shifting institutional policies towards the inclusion of diverse voices in the process of preparing for an exhibition. The motivation behind this shift is not to steer the conversation in any particular direction, but to ensure proper representation of Native American and other minority artists that has long been absent from museum programming.