NCAC Stands Up For Student Right to Protest in Oklahoma 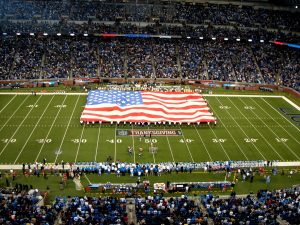 New York, NY, 10/23/2017— The National Coalition Against Censorship (NCAC) has urged the Stuart Public Schools Board of Education to rescind its policy of disciplining students who choose not to stand during the national anthem. Such a policy infringes on students’ constitutionally protected right to peaceful and non-disruptive political speech, which includes the right to protest.

The Stuart Public Schools operates Stuart Elementary School and Stuart High School in Stuart, Oklahoma. On October 5th, the Stuart Public Schools Board of Education (SPS) voted to adopt a policy that states, “all students, student-athletes and spectators are expected to stand during the playing of the national anthem at all school events, sporting or non-sporting, without any gestures of demonstration or protest.” While SPS Superintendent, Tracy Blasengame, has said that the policy is intended to promote “patriotism” and “citizenship,” it is NCAC’s position that the policy directly undermines the spirit of the First Amendment and chills student speech.

The issue of peaceful protest during the playing of the national anthem has frequently made national and local news in recent months. Both NCAC’s letter to SPS and the Coalition’s guide on student protest argue that bans on non-violent political expression by students teach young people that suppression of unpopular ideas is preferable to debate. Such lessons carry long-term consequences and threaten to undermine the First Amendment for future generations.

The full text of NCAC’s letter to the Stuart Public Schools Board of Education can be viewed below. Click here for a full screen view.