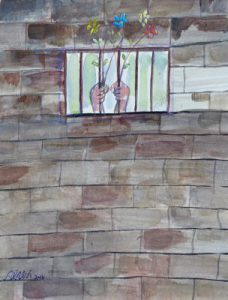 UPDATE 1/25/2018: Lawyers representing six Guantanamo detainees have written to Defense Secretary James Mattis and Rear Admiral Edward Cashman, the base commander, urging them to reverse their new policy: “A decision to forbid any detainee art from being transferred out of Guantanamo would not reflect well on the Defense Department’s operations there….In fact, news of the policy review has already added fuel to criticisms regarding the lack of transparency of operations and lack of access to the detainees. Instead, the Defense Department should continue to embrace its art program at Guantanamo and the resulting detainee artwork shared outside the prison, and avoid any appearance of stifling it.”

In November 2017, the National Coalition Against Censorship (NCAC) was alerted to a policy change by the US Department of Defense that prohibits art created by detainees at Guantanamo Bay from leaving the base, even in the event of a detainee’s release. The new policy appears to have been inspired by an exhibition of artwork created by detainees, hosted at John Jay College of Criminal Justice in New York. The show closes next week and, if this policy is not reversed, this could be the last time this art is available to be seen by the public. We encourage anyone who is able to attend the show and view these works of clear historical importance.

The letter warns that the new policy flagrantly stifles any public discussion that could arise from viewing the art, and therefore the artistic and human side, of Guantanamo detainees. Art that has previously left the base has been subjected to intense military scrutiny before being cleared for release. Absent security concerns raised by that review, this policy also violates the human rights of the detainees under international norms. Further, the directive suppresses documents of clear political and historical importance to the American public.

Ode to the Sea: Art from Guantanamo Bay is open through January 26, 2018 at John Jay College of Criminal Justice in New York. It is free and open to the public.

Co-Signatories to the official letter:

The official letter can be viewed below. Click here for a full screen view: