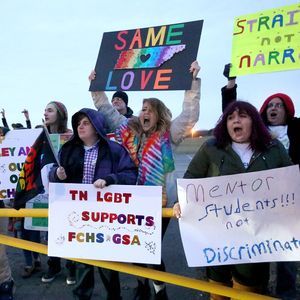 What do you do when community members are riled up with hate and fear over a school club centered on compassion and support? When there are laws preventing you from targeting said club, you apparently attempt some backdoor ways to shut it down. That’s what’s happening in Franklin County, Tennessee, where we had earlier reported on the anger that spewed out during a board meeting in February.

On Monday, the Franklin County Board of Education introduced an amended "Student Clubs and Organizations" policy and procedures. In one sense, this is good news; there had been warnings that they were considering banning all clubs, since they couldn’t legally shut down Franklin High School’s Gay-Straight Alliance due to the Equal Access Act.

But the proposed new rules would require clubs to keep agendas, sign-in sheets, and minutes on file, and available for school administrators to review upon request. And “[a] list of visitor(s) planning to attend club meetings must be submitted and approved by school administration prior to the meeting.” In other words, clubs would now be much more closely monitored than before.

Those rules apply to all school clubs, but some see it as a way to craft policies with one particular club in mind.

That point of view was enunciated by Franklin County School Board member Adam Tucker on Monday:

Prior to January, there was never any discussion by this board, or to my knowledge, discussion among any administrative employees, about seeking approval from parents before children participate in the Fellowship of Christian Athletes or P7. It’s a double standard.

According to the Human Rights Campaign, these kinds of tactics have been used to target and shut down LGBT programs before.The assumption is that some of these clubs are up to no good, and the administration wants to keep them in check. Fine. But when these changes come about because some community members begin likening the GSA, which just formed in January, to ISIS, or calling it a “sex club,” they’re opening themselves up to some serious questions.

If the school board indeed adopts the rules it presented to the public this week, it will have balanced its obligations to the Equal Access Act and to students who wish to continue organizing clubs. However, schools must be careful. If they consistently approve speakers for Christian clubs and not for the GSA, they may violate the First Amendment.