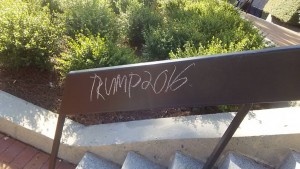 On March 22 the watchdogs at FIRE (Foundation for Individual Rights in Education) posted a piece headlined, "Good News for Free Speech at Emory University." The Atlanta college was commended for how it handled a case of vandalism against a pro-Palestine student exhibit, and a working group addressing student complaints decined to support a ban on the controversial app Yik Yak.

The very same day, actions at Emory were about to make headlines of a very different sort. A group of students protested the existence of pro-Donald Trump chalk messages on campus. The headlines were pretty brutal:

"Emory University Students Think Donald Trump Is Out to Kill Them"

Students discovered statements supporting Republican presidential candidate Donald Trump (i.e. "VOTE TRUMP") written in various places on campus. The mere presence of these messages apparently bothered a small group of students, who took their case to an impromptu discussion with school president James Wagner. Some of them argued that the messages caused "pain" in a place where they are "supposed to feel comfortable and safe."

Students reportedly demanded a formal response from the university denouncing Trump's political views. Wagner declined to do that, but then apparently declared that the school was poised to investigate:

The University will review footage “up by the hospital [from] security cameras” to identify those who made the chalkings, Wagner told the protesters. He also added that if they’re students, they will go through the conduct violation process, while if they are from outside of the University, trespassing charges will be pressed.

This certainly sounds like the school is going to extreme lengths to punish the expression of a political opinion. It's especially unfortunate because Emory has developed free speech policies to protect and promote political protest and dissent. In its "Respect for Open Expression Policy," the school declares its "unwavering commitment to a community that inspires and supports courageous inquiry through open expression, dissent, and protest."

Does this not apply when the topic is Donald Trump? Or is there something unique about chalk messages?

Actually, there is. As the school newspaper pointed out, there are rules about where and when one can chalk. Such speech

must be reserved and approved through Emory’s campus reservation service, 25Live. The Posting Policy says that: chalk cannot be on columns or walls, it must be done on horizontal, ground surfaces and areas where rain can easily wash it away. Failure to comply with these policies results in a clean up fee. Chalking also may only remain for 48 hours. After this time, another group can chalk, if they reserve their chalking through 25Live.

Emory's not the only school that has restrictive policies, of course. Just recently there was some controversy over how Boston University administrators were preventing an anti-racism student group from posting informational flyers; the school also requires groups to register in order to hold campus protests.

Nonehtless, as FIRE's Samantha Harris writes, this still sounds like an extreme overreaction on the part of Emory's president:

While Emory does place some content-neutral restrictions on chalking which the chalkers here may have violated, the remedy for violations is “a clean up fee,” not disciplinary action. This strongly suggests that Wagner’s response has more to do with the content of the expression—which sparked protests by Emory students who complained it made them feel unsafe—than with any potential noncompliance with Emory’s chalking policy.

But there's some dispute over whether the school is actually going to use security camera footage to punish anyone. A Newsweek piece noted that while the school paper reported as much,

In a statement to Newsweek on Thursday, a university spokeswoman clarified that “no follow-up action is planned related to the incident.” She says the chalkings “did not follow guidelines” for where and howstudents can write chalk messages, but that the content did not violate policy.

Newsweek also reported that the removal of chalk messages had been a source of controversy:

Those protesting this week’s chalking incident note that several months ago, the university washed away chalk messages that members of the Black Lives Matter movement had written. The university spokeswoman says a campus worker saw the markings “and thought they were not supposed to be on the grounds and washed them away by mistake.”

Whatever the facts, one has to hope that cooler heads prevail. An encouraging sign came from the editor in chief of the Emory Wheel, who wrote that while he appreciates the passions of protesting student, there are some bigger issues in play:

It is nonetheless necessary to ask those protesters what would happen should the tables be turned. Suppose we had a different administration. Suppose it was ruled that protests, such as the one on Tuesday, made Trump supporters feel threatened on campus. Freedom of speech works both ways, and its hindrance affects both sides. It is not the role of an institution that is devoted to the critical education of its students to tell those students which opinions they are allowed to have.