Satire and Swastikas in a New York High School

Previous Next
Satire and Swastikas in a New York High School

The images from the original 1968 The Producers are iconic: scantily clad women wearing only pretzels and pints of beer over their bosoms as singers proclaim “Springtime for Hitler,” Nazi flags rising from the stage in all this ridiculous glory, and Hitler, high as a kite, played by a shaggy-haired beatnik with an earring and a swastika around his bicep. Without these elements, Bialystock and Bloom’s planned flop would be doomed as they intended; but with them, high satire made the musical a hit – and a cause for laughter in every Mel Brooks-loving home in America.

So what happens when they’re removed from an entire set?

This is the question students, teachers, and community members in Orangeburg, New York asked when two banners bearing swastikas were removed from the production before the show went on at Tappan Zee High School last Friday. Four parents allegedly complained after dress rehearsal photographs promoting the musical emerged on Facebook.

South Orangetown Superintendent Bob Pritchard appears to have made the call after seeing the set, meeting with high school principal Jennifer Amos and director Ed Clinton, and conferring with several rabbis and the Rockland Holocaust Study Center. He told a CBS reporter that “There is no context in a public high school where a swastika is appropriate.”

Not even as a piece of satire? 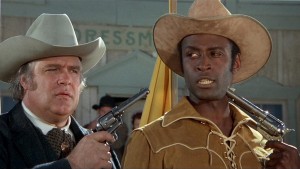 It’s what Mel Brooks does best: lambast a group’s utterly ridiculous actions to expose their bigotry as such. See: the racist citizens of Rock Ridge revealing themselves to be complete idiots when Sheriff Bart pulls one over on them in order to extricate himself from their threats in the iconic Blazing Saddles. "Oh baby, you are so talented," Bart says as he breaks the fourth wall, eyes to the camera. "And they are so dumb!"

What is lost when some of that ridicule is removed? Does it lose its punch, becoming merely a signature of the thing it’s aiming to parody?

We’re glad that the show went on despite the removal of iconic pieces of the set. But we have to ask why, when district leaders know clearly what the film is all about, they chose to censor a satirist’s work, and deny students, who understand what satire is, the opportunity to explore it and present it fully to their peers?

Apparently before the weekend's performances director Clinton read a disclaimer informing audience members that the students don't support Nazism. As if that were necessary.

In a 1978 interview with MacLean, Brooks said, “If I get on the soap box and wax eloquently, it'll be blown away in the wind, but if I do Springtime For Hitler it'll never be forgotten. I think you can bring down totalitarian governments faster by using ridicule than you can with invective.”

Perhaps the administrators in Orangeburg should take notes.