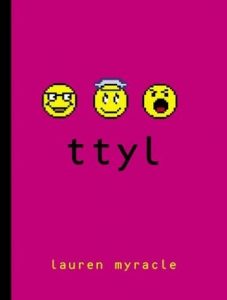 UPDATE 8/29/2016: In a letter to the Nassau County School District, joined by a group of free speech and publishing groups, NCAC calls on the district to keep the controversial books in school libraries on educational and First Amendment grounds. Read the letter in full below.

Parents in a school district near Jacksonville, Florida, are trying to remove two frequently challenged books from the Yulee Middle School’s library. According to the parents, the book TTYL and its sequel TTFN– two novels in Lauren Myracle’s popular Internet Girls series– are inappropriate for their Middle School children. Florida's Nassau County School District has convened a group named the Intellectual Freedom Committee to determine the fate of the books.

TTYL is a New York Times bestseller that gained fame for its unusual use of narrative. The entire book consists of instant-messager style transcripts between the main characters. The book and its sequel focus on the stories of female high school students: their love lives, social drama, and friendships.

Although the books are highly popular, parents in Nassau County, Fla, have objected to their subject matter, which includes discussions of hookups, drug use, and underage drinking. One parent told her local FOX news station that the books are “telling kids to rebel against parents. It’s telling them it’s OK to party, drink, cuss, and do other obscene things.” Another parent called on school officials to more closely monitor the content of books found in the school library.

According to the Nassau County School District's Executive Director for Administrative Services Mark Durham, the Intellectual Freedom Committee has been convened to issue a report on the books. The Committee consists of teachers, librarians, and administrators. Parents are not represented on the Committee, however, and the books currently remain in the library.

NCAC is in the process of drafting a formal letter to the Nassau County School District recommending that the books be allowed to remain in the library. The letter notes that TTYL and TTFN are critically acclaimed, highly relatable to teens and rebuts parental arguments that the books are not “age-appropriate.” A book is not “inappropriate” simply because it contains controversial subjects, the letter reads, rather, age-appropriateness refers to a book’s reading level. A book is age-appropriate if a typical student of the given age have the intellectual capacity and vocabulary necessary to understand the book.

According to the American Library Association, Lauren Myracle was the most frequently challenged author in 2009 and 2011. NCAC honored her commitment to free speech at its 2010 annual banquet.