Previous Next
Hip Hop Hologram: A Threat to Public Safety? 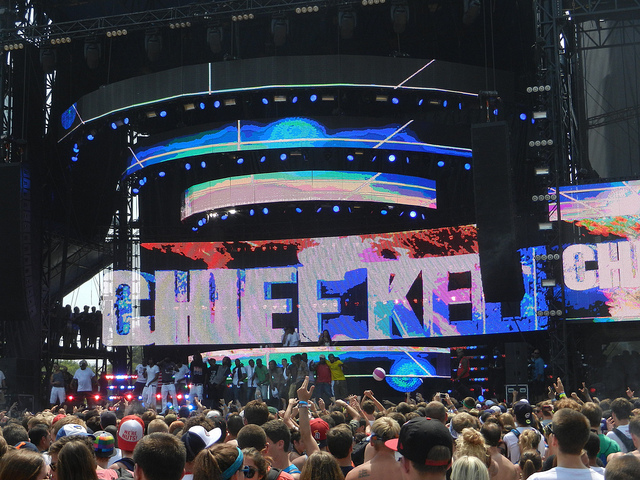 Welcome to the future: Hammond, Indiana police officers shut down a concert in a public park on July 25 because they were concerned that a hologram could have posed a threat to public safety…at an anti-violence benefit concert, no less.

The trouble started when Chicago rapper Chief Keef announced a few weeks ago that he would perform a benefit for victims of gun violence in Chicago, with the proceeds going to two victims' families. The rapper would appear via hologram from California. The Redmoon Theater in Chicago was set to host the show, but pulled out reportedly over complaints from the mayor's office. The New York Times reported that Chicago officials said that the rapper was "'an unacceptable role model,' whose music 'promotes violence' and whose presence via hologram 'posed a significant public safety risk.'"

Chief Keef has a history of legal trouble, including warrants for missing child support payments and driving under the influence. He was also sentenced to home confinement as a juvenile for pointing a gun at police officers and has been questioned in connection with other shootings. He says he's trying to put that behind him, and this concert was one such gesture.

After the Redmoon cancellation, promoters of the concert ("Craze Fest") found a new venue: Wolf Lake Pavilion, a city-owned park in Hammond, Indiana. Chief Keef was not on the bill, but he was the surprise guest via hologram.

After just one song, and a plea for peace from Keef ("Chicago, we need to stop the violence. Let our kids live"), local authorities shut the show down. Hammond mayor Thomas McDermott explained in the New York Times that Keef:

has a lot of songs about gangs and shooting people — a history that’s anti-cop, pro-gang and pro-drug use. He’s been basically outlawed in Chicago, and we’re not going to let you circumvent Mayor Emanuel by going next door…. I'm not going to invite someone that might be a threat to public safety.

Can government officials legally shut down a concert under such circumstances? UCLA law professor Eugene Volokh doesn't think so, writing in the Washington Post that "the government may not restrict speech because of its viewpoint, or the viewpoint that the speakers had expressed elsewhere, which seems to have happened here." That goes for the decision in Hammond– or anywhere else:

general safety worry can’t justify preemptively shutting down the event, either. See, e.g.,Terminiello v. City of Chicago (1949), where speech was found to be constitutionally protected despite a much more concrete danger of violence.

You can't preemptively cancel something because you 'think' there's going to be danger. It can be invoked only in situations where (a person) is intending to incite violence immediately, like a speaker telling his audience 'I want you to go across the street to this store and burn it to the ground,' for example. The fact that you have a hip-hop or rap artist whose message you don't approve or you don't like doesn't justify pulling the plug.

The city is standing firm. An attorney for the Hammond Port Authority argued that the contract signed by the promoters obligated them to follow safety directives issued by city authorities. The instruction to prevent Chief Keef from performing was one such directive, and therefore the promoters violated the terms of the contract.

But those policies don't appear to square with the Constitution. As Chicago Tribune columnist Eric Zorn pointed out: "The First Amendment guarantee of freedom of expression protects the infuriating, the baffling and the frightening from the impulses of those who'd silence them if they could."

Promoters say they're working on setting up a new Chief Keef hologram performance. Perhaps that will be another chance to see the First Amendment in action.