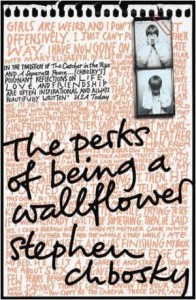 Stephen Chbosky's young adult novel The Perks of Being a Wallflower is once again at the center of a potential censorship controversy. In Dubuque, Iowa, a group of over a dozen parents leveled that the book was "obscene," objecting to "graphic sex scenes" and its depiction of drug and alcohol use. The Dubuque Community School Board has convened a formal review committee to decide the future of the book in classrooms and in the curriculum.

According to the Dubuque Telegraph Herald, Jodi Lockwood, a parent of a student at Hempstead High School, brought a reconsideration request to the Dubuque school board after discovering, with shock, that the book contained graphic scenes involving and rape and drug use. She expressed concern that the book could be harming students by sending the "wrong" message to children on these difficult topics. A panel discussion was then organized to discuss the book and organize the review committee, which will contain both school officials and students.

At the initial discussion, 13 parents expressed their worries around the book. One voiced concern that the passages depicting drug and sexual abuse would trigger trauma in young readers who had undergone similar experiences. Others suggested parents should be notified whenever potentially controversial materials are taught and that they should have to sign off on whether a book's literary value overrides concerns. The committee will reconvene at the beginning of December. NCAC recently came out against a proposed regulation in Virginia that would require schools to do exactly this.

Chbosky's The Perks of Being a Wallflower is listed frequently on the American Library Association's yearly list of the top 10 most frequently challenged books in schools and libraries. Most recently, NCAC defended the book in Pasco Middle School in Florida against similar concerns about sexually explicit content. The book was eventually removed from the school.

NCAC is currently drafting a letter to Dubuque Schools to defend the literary merits of the book and to again express concern at the use of labels like "obscene" and "sexually explicit" in describing critically acclaimed and valuable works of literature.