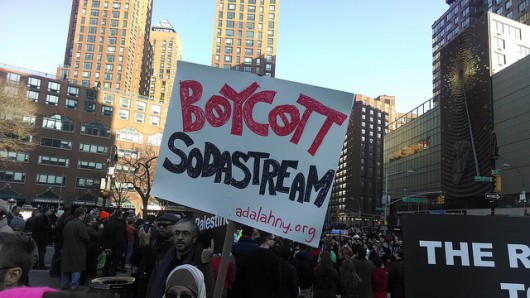 UPDATE 6/9/2016: The Jewish Insider reports that on June 5th, New York Governor Andrew Cuomo signed an executive order requiring "state agencies to divest themselves of companies and organizations who support the Boycott, Divestment and Sanctions (BDS) movement" against Israel. New York's Office of General Services will draft a public list of the offending companies over the next six months.

In a statement released to New York lawmakers, the National Coalition Against Censorship argues that a bill to prohibit state agencies from engaging in business with, and that would impose financial sanctions on, any person engaged in a boycott against Israel or other “American allies” clearly conflicts with First Amendment protection for freedom of expression and association.

The state legislation is intended to oppose supporters of the BDS (Boycott Divestment Sanctions) campaign against Israel, which seeks to use non-violent means to force changes in that government's policies towards Palestinians and Arab citizens of Israel. Similar "anti-BDS" bills have been proposed in several states.

The NCAC letter argues that it is "beyond dispute that boycotts are a form of expression protected by the First Amendment." Thus, legislative attempts to punish citizens for engaging in such activities would be plainly unconstitutional. And courts have ruled that governments cannot make political beliefs or affiliations a condition of receiving public contracts; the bills in question would seek to do just that in New York state.

No matter how one feels about the specific political goals in question, the statement points out that boycotts "have a respected place as a form of political speech." Lawmakers would be well-advised to appreciate these concerns:

We strongly urge members of the New York State Legislature to demonstrate their commitment to fundamental constitutional rights by rejecting these proposals.