Some parents in Omaha, Nebraska, got a little rowdy last month because they insist that an expansion of public school sex ed curriculum is an effort to take away their children’s “purity.”

Omaha Public School District, which has had a “Human Growth and Development” program for nearly 30 years, recently amended and updated its curriculum to include discussions on gender identity, emergency contraception, and abortion. The expanded curriculum seems to be in response not only to changing times but also a growing chlamydia epidemic in the county.

The district opened the proposed curriculum to public discussion, and got more than it bargained for. On October 20, over a thousand people crowded into the auditorium at the Teacher Administrative Center, and the meeting quickly degrading into shoving and shouting matches–including the rant of one mother, now known on social media as “PurityMom,” who shouted,“I have five daughters! Five daughters! Who’s going to keep them pure? Nobody! I am! Not OPS! Not OPS!” 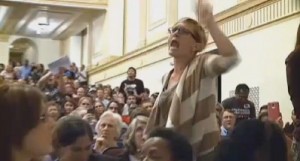 In a comprehensive FAQ sheet handed out at the meeting, the district assured parents that no, they would not be driving their daughters to get abortions. Discussion on LGBT issues and gender identity, which would be taught in grades 7 and 8, would focus more on being respectful of one another, "even if ideas and beliefs are different from personal beliefs." A survey of community members conducted earlier in 2015 indicated that the vast majority – 70% — supported its inclusion, and even more – 93% — supported high school lessons on birth control.

But all of this didn’t assuage some parents. One said in an interview after the meeting, “We want to make sure our kids aren’t being taught things we don’t believe in. We don’t believe in things like gender identity.”

Public school is not really a place to teach beliefs or personal values. It’s a place for kids to just know facts, facts about the effectiveness of contraception, facts about consent, facts about the LGBT community. These facts belong in public schools because when these kids grow up, that’s what they’re going to encounter in the world.”

We couldn’t have said it better.

Indeed, whitewashing the facts in abstinence-only education classes, or even classes that avoid discussions about sexual orientation or even contraception is a violation of students' First Amendment right to information, and amounts to censorship. Every family is home to a different set of beliefs and morals. Opening up discussion of facts inside the classroom will arm students with the knowledge to make smart choices about their lives.

We hope the Omaha Public School District stands up to those wishing to silence discussion and allows its students their right to learn, think, and speak freely.