Top 5 Forbidden Affairs of the Heart

Previous Next
Top 5 Forbidden Affairs of the Heart

In honor of Valentine’s Day, NCAC has compiled a list of 5 scandalous couples that rattled more than just the bedpost. In fact, their romances sparked debate about the role of free expression, censorship, and First Amendment rights—some even thousands of years later.

NCAC hopes that your Valentine’s Day is as passionate and romantic—though maybe not as dramatic—as these forbidden affairs of the heart.

When your muse inspires a hell of a poem. 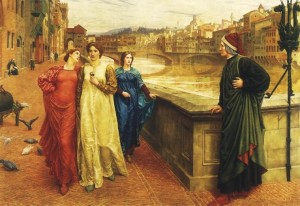 Italy: the land of sumptuous foods, Leonardo Da Vinci, and a forbidden love story. Beatrice and Dante first laid eyes on each other at the ripe ages of eight and nine, respectively. Dante fell in love immediately, imbuing her with the divine and noble qualities of any right and true muse. Though it took nine years following this first encounter, Beatrice finally noticed Dante in the crowded streets of Florence. Saturated with love, Dante retreated to his room to think upon his muse and eventually fell asleep, only to dream of the first sonnet in his La Vita Nuova, one of the world’s greatest romantic poems. For Dante, his love sonnets could do no justice to the incredible beauty and awesome vigor of Beatrice. So when he penned La Commedia, a poem about the soul’s ascent through Hell, Dante ensured that Beatrice was the only one that could guide his wretched soul to the splendors of Paradise. Although La Commedia is the fruit of Dante’s true love, it has nevertheless fallen under the hard hand of censorship. In 2012, the Italian human rights organization, Gherush92, wanted to remove the poem from school curriculums, arguing that it is “racist, Islamaphobic and antisemetic.” Lucky for Dante, his home country kept their cultural cool and came to the defense of the work, maintaining that it would “be folly to abandon the study of a masterpiece that has helped build the image of humanity.” Dante and Beatrice’s ending was not as copacetic: Though Beatrice was his literary innamorata, they both remained married to separate people in the real world. 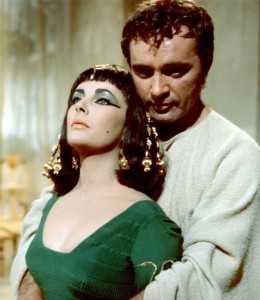 Their forbidden love story has the makings of a box office hit—which makes sense since Elizabeth Taylor and Richard Burton portrayed one of the greatest love stories of all time on the big screen. As Cleopatra and Marc Antony, Taylor and Burton personified a relationship rooted in lust and betrayal. And in the fashion of life imitating art, both actors publicly broke their marital vows by carrying on a torrid affair. Even the Vatican opened its shuttered windows to decry the adulterers, referring to their union as an “erotic vagrancy.” Nonetheless, Taylor and Burton ignored the tabloids, ditched their significant others, and carried on a lavish romance glittered with private jets, yachts, and—of course—million dollar jewels. Eventually, their constant fighting and reported alcoholism led Burton to be unfaithful with a young co-star. But, within a year, the starlets announced that they were still in love and remarried—only to be met, again, with karmic retribution. Taylor and Burton divorced for a second time and were never able to reconcile. Their Oscar-nominated film Cleopatra garnered notoriety for more than just the carnal philandering of its stars. The film was “widely denounced by churches and barred from many theaters nationwide.” Though this disregard for free expression never seemed to silence Taylor and Burton: “Maybe we loved each other too much,” Taylor once reminisced of her relationship shortly after Burton’s death. Cleopatra and Marc Antony would certainly understand.

3. Richard I of England and Phillip II of France

It takes the Lionhearted to love who one truly loves. 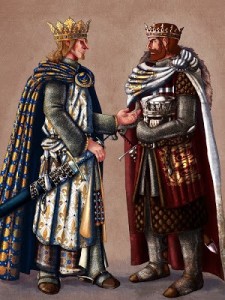 A buff, bronzed and unbeatable warrior, Richard the Lionhearted never let fear deter him from his ultimate goals—even on the battlefield of love. With no children and an apparent disregard for his wife, Richard has become something of a gay icon, especially considering his romance with King Phillip II of France. In 1187, a chronicle reported that the two men were so close that “at night the bed did not separate them.” Rumors of a forbidden love were borne in the midst of medieval intolerance for anything veering off the path of brotherly affection.

Unfortunately, the two kings’ relations began to sour after Richard became King of England, dumped Philip’s sister, Alice, and fought battle after battle for medieval dominance. Meanwhile, censorship battles concerning LGBT issues continue. In 2014, school administrators in Delaware removed The Miseducation of Cameron Post by emily m. danforth from the summer reading list after the school received complaints about the book’s vulgar language (the book’s protagonist just happens to be a lesbian). NCAC intervened and managed to get the book reinstated so that students of every sexual orientation can enjoy it. If only Richard and Phillip’s story had a similarly happy ending.

A lesson on why power can never bring you happiness. 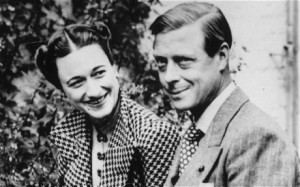 Wallis Simpson may be the most famous mistress in history (next to Monica Lewinski, of course). But Prince Edward wasn’t married to another woman, he was married to a country. Simpson, a twice-divorced American, was not exactly a favorite of the British people. This did not stop Prince Edward from falling in love with her, though, and the two flaunted their scandalous affair to the great dismay of the Church of England and Parliament. When George V died, Edward ascended to the throne; but it soon became clear that he intended to marry Simpson, sparking a royal disaster forever termed the “Abdication Crisis.” On December 11, 1936, Edward, through a BBC broadcast, bared his forbidden love to the world and renounced his birthright. Upon reflection, he proclaimed that he could not perform his duties as king without the support “of the woman I love.” While American newspapers reveled in the rumor of a home-grown Queen, the British press remained muted on the subject, choosing to censor their reporters in order to be mindful of upsetting the King. Lucky for us Americans, we enjoy what British author and NCAC free speech defender Neil Gaiman called a “glittering, glorious thing called the First Amendment.”

All’s fair in love and war.

Some love stories will inevitably be forgotten as the lovers and all who knew them are lost in the fabric of time. But once in a while a story is so powerful that is becomes the stuff of legend.

Cleopatra and Marc Antony were an ancient world power couple: She was Egypt’s Queen and he was a Roman politician and general. Cleopatra’s beguiling looks and sensual aura quickly cast a spell over Antony who (gasp) was already married. Their union created a tenuous political alliance between the territories that would eventually prove weak when future emperor and Antony’s former partner, Octavian, convinced the Roman senate that the duo were power-hungry. War broke out and Octavian proved victorious over the lovers, capturing the city of Alexandria and defeating the last of Antony’s troops.

While Cleopatra took refuge in Egypt, Antony committed suicide, convinced that his lover had been killed. Soon after, Cleopatra took her own life, unable to live in a world where Antony did not exist. William Shakespeare was so inspired by Cleopatra and Antony’s story that he penned a play dedicated to the disastrous duo. Adapted into stage plays, films, and even TV shows, it was nevertheless one of Shakespeare’s tamer tragedies. But theater censorship has existed since its emergence as an art form and Shakespeare has fallen many times under its repressive regime. Othello was censored in the United States by President John Quincy Adams who described the relations between Othello and Desdemona as “disgusting.”  While Cleopatra and Antony’s love story may not have ended happily, we can only hope that they continue to inspire masterful works of art.