“The thought that leads me to contemplate with dread the erasure of other voices, of unwritten novels, poems whispered or swallowed for fear of being overheard by the wrong people, outlawed languages flourishing underground, essayists’ questions challenging authority never being posed, unstaged plays, canceled films—that thought is a nightmare. As though a whole universe is being described in invisible ink.”

NCAC mourns the death of Nobel laureate and Pulitzer Prize winner Toni Morrison, who passed away on Monday, August 5, 2019, at the age of 88.

“The world has lost a pioneering author and an eloquent advocate for free expression,” NCAC Executive Director Chris Finan said.

In Beloved, The Bluest Eye, and Song of Solomon, Morrison gave a voice to the voiceless and forced readers to confront the impact of slavery, racism, and violence. Her works are a treasured part of the literary canon and a staple of English curriculums in part for their honest depictions of the black experience in America.

It is because Morrison’s books are so powerful that they are among the most frequently challenged titles in schools across the country, often because of their sexual content. In defending them, NCAC has urged critics to consider her books as a whole. She introduces readers to the complexity of her black characters, including their sensuality, and requires us to think about sexual violence as one of the many forms of oppression they endure.

Morrison spoke out against censorship frequently during her career. In 2009, she edited Burn This Book: PEN Writers Speak Out About the Power of the Word, a collection of essays about censorship.  Shortly after its publication, she was the guest of honor at an NCAC event. In conversation with author Fran Lebowitz, she discussed the history of censorship, its sources, and its consequences. 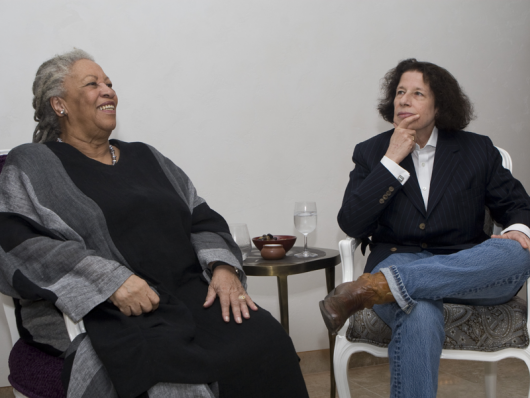 Above all, she urged people to see that in defending authors threatened by censorship we are protecting our own freedom:

“How bleak, unlivable, insufferable existence becomes when we are deprived of artwork. That the life and work of writers facing peril must be protected is urgent, but along with that urgency we should remind ourselves that their absence, the choking off of a writer’s work, its cruel amputation, is of equal peril to us. The rescue we extend to them is a generosity to ourselves.” (Burn This Book)