As defenders of free expression and artistic freedom, the National Coalition Against Censorship (NCAC) strongly condemns the removal of an artwork commemorating a victim of a police shooting from a Memorial Day exhibit in Miami Beach, Florida. In addition to likely violating the artist’s constitutional right to free expression, the removal of the work is antithetical to the spirit of Memorial Day and shows a particular disregard for its African American roots.

Miami Beach City Manager Jimmy Morales requested the removal of a piece by artist R. Jackson that memorializes Raymond Herisse, a young black man fatally shot by Miami Beach Police on Memorial Day weekend in 2011. The piece was part of “I See You Too”, an installation at a gallery on Lincoln Road that explored the effects of propaganda on public perception of people of color. A wall label described the work as an affirmation of #BlackLivesMatter that “call[s] into question the excessive force, racial discrimination, violence, and aggression often present in interactions between police and unarmed Black civilians.”

The work’s removal is especially ironic since it was part of the city-wide program “ReFrame”, an attempt to make Memorial Day celebrations more inclusive of Miami Beach’s black community. A city spokesperson said that the program’s purpose was to create an opportunity for inclusiveness, and the City Manager felt that the artwork fell short of this objective. But surely it is the City’s shortsighted removal of the artwork that fell short of inclusivity. As an act of censorship it will likely cast a chilling effect on the city’s future collaborations with black artists. 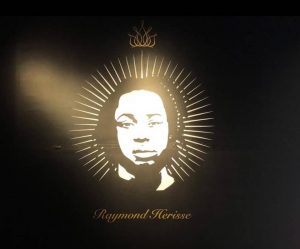 The artwork and the reasoning behind its removal recalls other recent incidents where artworks were removed over their criticism of police. In a high profile 2017 controversy, a student artwork was removed from display on Capitol Hill by Republican lawmakers over its depiction of police as pigs in a protest against the police shootings in Ferguson (MO). Efforts to restore the work ultimately failed.

The ability to freely criticize government actors, such as law enforcement officials, is one of the foremost reasons why the First Amendment exists. Citizens’ freedom to speak out against perceived governmental abuses and injustices is necessary for the health of our democracy: were government able to silence such criticisms, meaningful political discourse would be impossible.