New York, NY 1/9/2017– The National Coalition Against Censorship (NCAC) and 16 other nonprofits have filed an amicus brief in the D.C. Circuit in support of Representative William Lacy Clay of Missouri and his constituent, David Pulphus. Pulphus’s painting, Untitled #1, was selected as a winner in 2016’s Congressional Art Competition for high school students. After pressure from some members of Congress, including Speaker of the House Paul Ryan, the Architect of the Capitol retroactively removed the painting over the objections of its sponsor, Congressman Clay, citing competition guidelines that had never before been enforced.

Pulphus’s artwork is an allegorical depiction of clashes between protesters and police in Ferguson, MO. The work hung among the hundreds of other winning artworks in the Cannon Tunnel at the US Capitol Building. Seven months after the painting was first displayed, internet commentators began advocating for its removal, claiming it was offensive to law enforcement. Apparently bowing to partisan pressure, the Architect of the Capitol removed the painting. Congressman Clay and David Pulphus subsequently filed suit over the violation of Pulphus’s First Amendment rights.

As NCAC’s Director of Programs, Svetlana Mintcheva, argues, “David’s painting follows a long tradition of socially-engaged political allegory. Removing it because some Representatives disagree with its viewpoint sends a message to young people – and all citizens – that political censorship is alive and well in the hallways of Congress. And if censorship is welcome there, would it not also be tolerable in other public venues?” 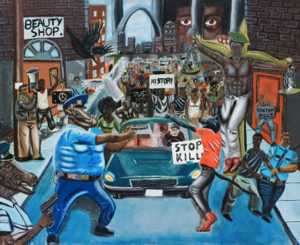 The lower court found that the removal was undoubtedly “viewpoint-based,” but held that the competition itself constituted “government speech,” which allows the government to control the message it is expressing and limits First Amendment protections. In this recent brief, NCAC and its fellow amici argue that the District Court erred in treating the art competition as “government speech” and setting a dangerous precedent for politically-motivated art censorship.

The co-signatories of this brief include arts services, volunteer lawyers for the arts, arts advocates and defenders of free expression. The blatant viewpoint-based censorship in this case opens the door to future censorship of political speech in frequent art exhibition venues including public libraries, universities and government buildings, be they village halls or the US Capitol Building.

Full text of the amicus brief can be read below. Click here for a full screen view: