NCAC is extremely disappointed by the decision not to return Xandra Ibarra’s work to the XicanX: New Visions exhibition in San Antonio. Despite a determination that the work did have serious artistic value, the Arts Commission voted to leave the final decision to the director of the Department of Arts & Culture, Debbie Racca-Sittre. Racca-Sittre has stated that she has no intention of returning the video work to the exhibition.

The Supreme court has repeatedly rejected the position that the free speech rights of adults can be limited to what is acceptable for children, regardless of the government’s interest in protecting children. In Bolger v. Youngs Drug Products (1983), Thurgood Marshall argued that “the level of discourse reaching a mailbox simply cannot be limited to that which would be suitable for a sandbox.” Racca-Sittre’s contention that all art displayed in San Antonio’s public spaces must be suitable for children is directly at odds with this long-held position.

2/25/2020:
San Antonio’s Department of Arts and Culture Centro de Artes subcommittee met on Tuesday, February 25th, to discuss the censorship of Xandra Ibarra’s work. The subcommittee unanimously determined that Ibarra’s video was covered by the “serious artistic value” standard that exempted it from being labeled obscenity and voted that it should be displayed as soon as possible. The subcommittee’s decision is only a recommendation, however, and will be considered by the Arts Commission at a meeting scheduled for March 10th.

Originally published 2/20/2020:
NCAC has written to the mayor of San Antonio, Texas, after San Antonio’s Department of Arts & Culture removed an artwork by Xandra Ibarra from an exhibition because of apparent discomfort with its unconventional representations of sexuality and the challenge it presents to gender stereotypes.

Suzy González and Michael Menchaca, under their collective name “Dos Mestizx,” curated the exhibition “XicanX: New Visions” celebrating Chicano art at Centro de Artes, a downtown gallery owned by and funded by the City of San Antonio’s Department of Arts & Culture. On the day of the opening, Ibarra’s video work “Spictacle II: La Tortillera” was removed upon orders from the city, despite the curators complying with city requests to curtain off the work with advisory signage. The exhibition opened on February 13 and will remain up through June 28.

Created in 2014 from a live 2004 performance, Ibarra’s work addresses race and gender stereotypes through the artist’s performance as a minstrel Mexican housewife who takes on her “racial bondage to hot sauce, tacos, and demographic panic” in a humorous retro border corrida. 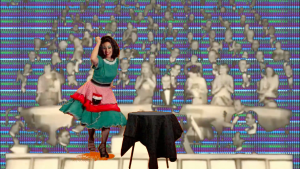 San Antonio’s city attorney determined that the work violated a Texas statute disallowing “obscene content,” despite the work not meeting the legal definition of obscenity upheld in Miller v. California (1973), which exempts material with “serious literary, artistic, political, or scientific value.” Ibarra is a well-recognized performance artist. Her work has been shown in museums and other established venues like El Museo de Arte Contemporañeo (Bogotá, Colombia), the Broad Museum (LA, USA), ExTeresa Arte Actual (DF, Mexico), PPOW Gallery (NYC), Anderson Collection (Stanford) and the Yerba Buena Center for the Arts (SF). The work in question has been exhibited nationally and internationally, including at Centro Nacional de las Artes in Mexico City, and the National Museum of Women in the Arts in Washington, DC.

This act of censorship flies in the face of the City of San Antonio’s First Amendment obligations. Government officials cannot arbitrarily impose their prejudices on a curated exhibition. Allowing public officials to remove anything having sexual references or content is likely to violate First Amendment principles and generate—as in this case—decisions based on subjective interpretation.

In removing Ibarra’s work, the City of San Antonio is likely violating the free speech rights of the artist, exposing the city to legal liability. NCAC strongly urges Mayor Ron Nirenberg to restore the artwork to the exhibition immediately.

The show’s curators have created a petition to restore the work. It can be read here: www.change.org/p/artists-protect-the-civil-right-to-exhibit-queer-art-in-san-antonio-today

The full letter can be read below. Click here for a full screen view.