Previous Next
ALA Reveals Top 10 Silenced Stories of 2017

Often, the most frequently challenged books tell the stories that most need to be heard. The 10 most challenged books of 2017, according to the American Library Association, were no different.

Thirteen Reasons Why by Jay Asher topped the list for its discussion of suicide, the third most common cause of teen deaths. In parts of the country, teens looking for narratives about gender identity and the LGBT experience were deprived of books like Tango Makes Three, I Am Jazz, Drama and George which were condemned for simply featuring LGBT characters, despite their uplifting messages of love and self-acceptance.

In the wake of countless mass shootings and police shootings of unarmed people of color, acclaimed novels like Angie Thomas’s The Hate U Give which tells the story of a teen witness and activist should be in every school library. Yet it was banned from libraries and curriculums and debuted at #8 on the ALA’s list.

Even time-honored classics like Harper Lee’s To Kill A Mockingbird and established favorites like The Kite Runner and The Absolutely True Diary of a Part-Time Indian, which challenge young readers to think critically about cultural stereotypes and social injustices, were repeatedly challenged for derogatory language, violence and sexual themes.

The ALA published the list along with an animated video calling young readers to action in the fight against book censorship.

Download a copy of the Kids’ Right to Read Action Kit and our student protest guide, Be Heard! to learn how you can defend banned books in your community. 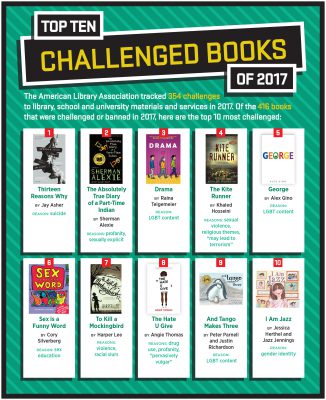