"A few years ago, among 4 artists, I was invited by Balkans Arts Link to work and exhibit in Tuzla, Bosnia.

I remember very well still, my visit to the Public Park, turned now into a cemetery. There, as a result of a bomb that killed 70 people, lay the bodies of numerable children with their photos + age on their graves.

That will remain in my memory for ever."

Our work utilizes volunteer-based public performance as a means for articulating shared ideas within our community. What began with projects that engaged the passerby in interplay with absurd, random events, developed toward the discovery of collective socio-political ideas. Volunteerism and the synergy produced by an open forum for the creative expression of each person who participates in our projects has become the most important component of our work. We believe that presenting an idea through the collective art form, rather then traditional means of protest, allows for the delivery of authentic artistic and political messages to wider audiences.

NO bUSH photograph exhibited as part of this group show, which was presented under the auspices of Art for Change.

Traveling around the country, Tim Davis cast a photographic eye on the urban landscape. From sparse gatherings at abortion and anti-flag burning protests to humorous situations at polling places and interesting displays of election paraphernalia, Davis expresses an ironic point of view that paints a puzzling picture of present-day America.

Samuel Wiener is an artist whose works No More! and Those Who Fail to Remember were created as a response to the Vietnam war in the early seventies. Each work carries a significant weight of relevance to the current state of our world today. Sam Wiener lives in New York City. 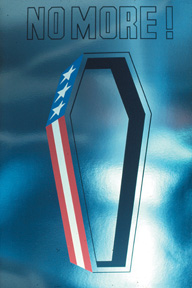 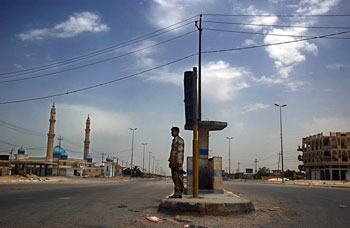 WMD, the first solo exhibition of photographs by Moises Saman, is a collection of works from the three ongoing conflicts in Afghanistan, Iraq and Palestine, with some photographs from Iraq made as recently as May 2004 The inauguration of the exhibition is timed to coincide with the transfer of power in Iraq, where Saman has returned to photograph the events at Satellite – a division of Roebling Hall, 94 Prince Street (at the corner of Mercer), 7-9 PM

Michael Barone has been photographing the female form for over twenty years. Viewed through the lens of recent media turmoil over an exposed nipple during the Superbowl halftime show, and unprecedented fines levied by the FCC for "obscene" material, Barone's nudes are documents of great relevance. What is obscene? What is sexual? What is repression? These are issues Barone addresses through his skillful silver halides pieces, that from darkness and light unveil flesh, sexuality, inhibition and conflict.

Annu Matthew will explore post-Sept. 11 backlash against South Asians in a digital photographic study The Backclash of September 11. In Kingston, R.I. at the University of Rhode Island's Fine Arts Center Galleries.

The Chicago Arab American Arts Council and the American Friends Service Committee sponsored a photo exhibition at the Thompson Center of the Palestinian experience between 1948 and 1998. In one photo, a body is carried through the streets of Bethlehem. Another shows a Palestinian youth lying in the street, shot by the Israeli army, as other Palestinians throw rocks. The photos were removed on June 3 because of concerns that it was too controversial, but were reinstalled just the following day. The exhibition was on display until June 7.

The International Center of Photography in New York has a small exhibition of recent photos from Afghanistan, picturing many of the dead civilians–pictures the US press has not seen fit to publish.

6 Months, A Memorial at the Photographic Resource Center, Boston University, presents photographically-based works made in response to, but not necessarily documents of, Sept. 11 memorials. The work ranges from color photographs of spontaneous memorials and vigils to "A Moment of Silence," a one-minute video showing a close-up of a candle filmed during the nation-wide vigil (9/21/01), to "Flaggingspirits," a collective web-based project by photographers from all over the U.S. concerning the use and display of the American flag, to a recycled wedding dress adorned with newspaper images of Afghan people. March 11-April 28, 2002.

Aftermath: Photography in the Wake of September 11: an ongoing series sponsored by the International Center of Photography in NYC of exhibitions, films, lectures, discussions, & publications that attempt to frame and understand the impact of the terrorist attacks on America through photographs. The Aftermath project means to broaden the dialogue around photography, to move beyond our collective fascination with the pictures many of us have committed to memory and to consider how they intersect with wider political and aesthetic issues. January 11-March 17, 2002.

Social Documentary Photography – A Group Show by the NYC Indy Media Photo Collective: Throughout history, Social Documentarian photographers have rarely had a secure home. They have been beaten, jailed, black-listed and even that people would sometimes rather not see. This show at the Brecht Forum exhibits work which reflects the raw passion of independent media makers and documentarians. Exhibit opening on July 2.

The Chicago Arab American Arts Council and the American Friends Service Committee sponsored a photo exhibition at the Thompson Center of the Palestinian experience between 1948 and 1998. In one photo, a body is carried through the streets of Bethlehem. Another shows a Palestinian youth lying in the street, shot by the Israeli army, as other Palestinians throw rocks. The photos were removed on June 3 because of concerns that it was too controversial, but were reinstalled just the following day. The exhibition was on display until June 7.