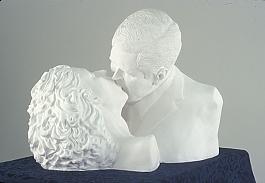 Grupo Aire Libre is a pick up group that has the need to create art for public space with any message attached concerned with the exploration of "Free Speech Zones" / Temporary Autonomous Zones.

The design of G8 is taken directly from the design of a World War time ration book Liberty Dollar. It mirors the stamps one would use to purchase goods. Instead of Lady Liberty's hand holding the torch there is an M-16 with a gas pump nozzle for a trigger.

The format is designed to encourage people to do the same either posting the signs created here or hopefully creating their own.

Currently signs are posted in different places in Texas.

The markers were conceived as part of the "I-75 Project," which would place historical markers with social content at every rest stop up and down Interstate 75, which runs through Michigan, Ohio, Kentucky, Tennessee, Georgia and Florida.   The artist considers the markers as social "thought starters" and wanted them to promote political discussion.

The installation work takes traditional games such as chess, Scrabble and darts, and adds an Iraq War twist to the games turning them into artistic statements about the war. In one of the games Gunter-Seymour created a chess board out of an Iraqi map and fashioned pieces to include the faces of President Bush, Osama bin Laden and others, while the pawns in the war are the troops.

Kyoto, No Kyoto by Mark Williamson – In December 1997, more than 160 nations met in Kyoto, Japan, the outcome of which was the Kyoto Protocol, in which the developed nations agreed to limit their greenhouse gas emissions, relative to the levels emitted in 1990

Ratification required enough signatures to account for 55% of total greenhouse gas emissions within the group. The US, which accounts for 36% of the entire group, refused to sign in 2001, arguing: a) "not enough science" surrounding the issue b) signature would place an undue strain
on the US economy and c) developing nations not required to sign.

The likely result is more frequent heat waves, droughts, extreme precipitation events, wildfires, heat stress, vegetation changes, extinction of numerous species, and sea level rises. Filthy and deteriorating, unable to gain consensus while deflecting our own responsibility in the name of
materialism, we continue to melt under the weight of the Kyoto Protocol non- results. The word "Kyoto" floats forever atop the dirty motor oil encapsulated in our subconscious.

The War Room Project: an Anti-War Installation by William T. Ayton is constructed of four wall-sized panels depicting fundamental aspects of war: warriors, victims, witnesses, and aftermath. Unlike conventional war rooms designed to devise military strategy, Ayton’s War Room forces a provocative confrontation with the brutal realities and consequences of war. Inside the

almost claustrophobic space, intense images engulf the viewer compelling us to face fundamental questions of where we each stand in the war room. The installation is on view at Chashama, 208 West 37th Street, New York. The gallery’s storefront window showcases THE PEACE PIECE, a multi-component art project originally conceived by Adelle Lutz with sound and video installation by Courtney Harmel & Sara Driver. THE PEACE PIECE was performed in NYC in spring 2003; women wearing burkhas painted with UN statistics walked throughout NYC public spaces offering a silent peace meditation with every step. THE PEACE PIECE was previously presented and made possible by Creative Time. 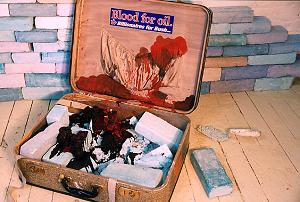 Two pieces of art, one by Madeleine Hatz (shown here) and another by James Sadosky and Kimberly Howard, were removed from an exhibition entitled "The Luggage Project" at the Denver International Airport because of complaints that the works were inapproriate and offensive. Artists from around the world were invited to turn their suitcases into works of art. Of the two suitcases removed, a suitecase with a bumper sticker attached that reads "Blood for oil. Billionaires for Bush" was removed. The items were on display before security checks and enclosed in glass.

Jeffrey Allen Price's sculpture the STATE OF THE OBELISK is made of five colors, each one 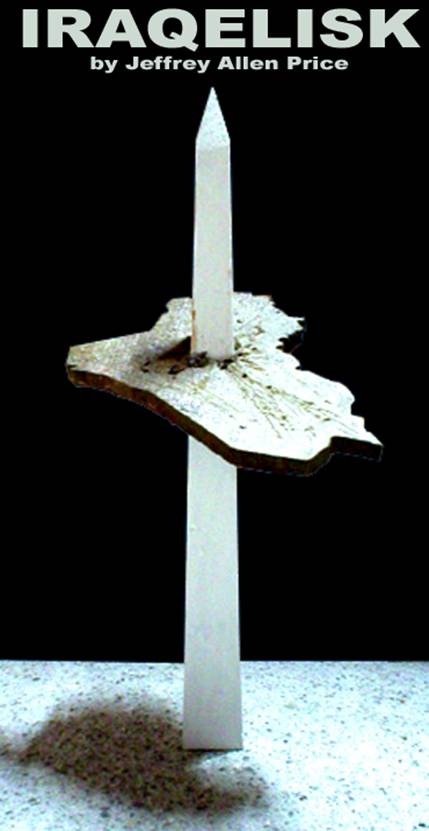 representing a LEVEL OF RISK as dictated by theHomeland Security Office in the White House. One color, or side of the STATE OF THE OBELISK is always illuminated from within, corresponding to the current LEVEL OF RISK. (If and when the LEVEL OF RISK reaches SEVERE or Red, the top pyramidion of the obelisk lights up and flashes, sounding a siren). The shape and proportion of the sculpture correspond to those of the Washington Monument in Washington, D.C. The current STATE OF THE OBELISK is ELEVATED or Yellow. IRAQELISK is a model for an edition of sculptures the artist is currently working on. For more information please send an email to [email protected] (631) 948-4223.

Motivated by the events overseas, Joyce Crane has created a work suggesting an analogy to the war in Iraq. According to Crane, Iraqi Oil takes on the American initiative in the Middle East. " I painted the target…and asked a friend to have her brother shoot it with a rifle…I then used fire to highlight the holes from the bullets…all representative of what Bush has done to Iraq."

Developed as a response to the first Gulf War, Lucy Orta's Refuge Wear captures the elements of survivalism and refuge. Orta began her career as fashion designer. Disillusioned with the state of the fashion industry, she turned her efforts into art. More recent installations by Lucy Orta include Collective Wear, sculptures in the form of tent domes and The Mobile Intervention Unit where Orta dressed two Red Cross ambulances with the faces of cows, referring to mad cow disease, and the image of a crowd of people in life jackets to symbolize the strife of Rwandan refugees. 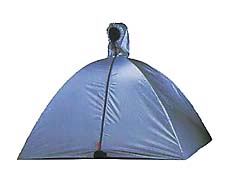 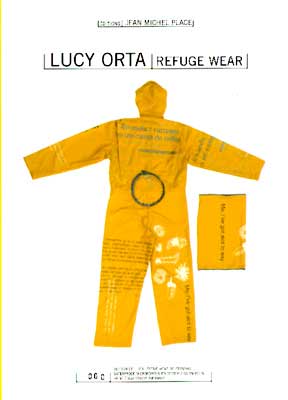 The Anton Kern Gallery presents an exhibition of Brazilian artist Marepe's works. For his first solo show in New York, Marepe has prepared six individual artworks whose media ranges from photography and painting to sculptures composed of light bulbs and school chairs. The installments deal with the issues of religion and politics from a very personal perspective. The show runs through July 30, 2004. The Anton Kern Gallery is located at 532 West 20th Street New York, NY 10011 tel: 212.367.9663 fax: 212.367.8135 [email protected]

With the billions of bombs America has dropped, and millions of foreign civilian's our armed forces have killed in the past century, artist Marcos Ramirez wondered how acquainted the average American is with this ignominious, although, perhaps unavoidable past. The Reading Public Authority may have wondered the same, recently approving Ramirez's artwork called Road to Perdition which engages the average American in this self-reflection.The billboard, which will be installed along side a major street in Reading Penn. lists various cities that America has bombed and the dates of the conflicts. Reactions of local citizens sent the work into a malestrom of controversy. But the city counsel and arts organizers are standing by the piece and Ramirez is keeping his ear to the streets, relishing in the moment of collective self-reflection his work has inspired. 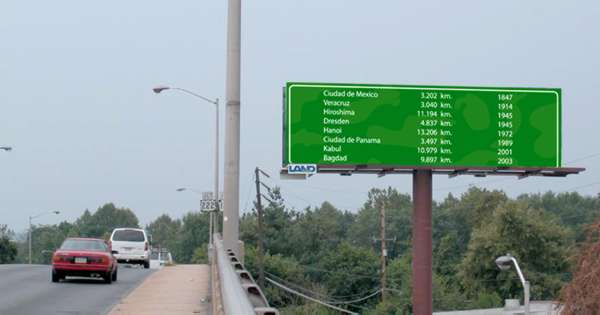 Michael Najjar's collaboration w/Dieter Jaufmann, Information and Apocalypse, uses highly stylized photograph of war scenes to demonstrate the convergence of war and cinematography that has produced the modern and perverse hybrid of the "wartainment" phenomenon. Media footage as both a means and an ends are explored in this collection of work. Najjar notes that in the postmodern age, for acts of warfare and terrorism, the "message does not lie in the actual attack but in the images it generates." Image has taken primacy over action, and the iconography of war is used to promote the idealogy of one side against another. Tools such as real time, blurred visuals and cinematographic view are all employed by the war machine to evoke in the populace simultaneous support and intellectual confusion for the acts of violence. These tools are magnificently explored in Information and Apocalypse which can be viewed at Goethe-Institut 1014 5th Ave. (betw. 82nd & 83rd Sts.) through 11/13/03. Contact the gallery at 212-439-8700, www.goethe.de/newyork Mon. Weds. & Fri. 10-5; Thurs. & Tues. 10-7. The show is free.

Nancy Worthington a California based artist has created an exhibition entitiled The George Dubya Series. The installation addresses issues such as the Florida elections, the government's role in the events of 9/11, the convergence of corporations and governance and many other flash points of dissent. Worthington adeptly meshes ready-made, pop-culture, commercial products with electronics to create an interactive exhibit where the spectator becomes the participant. After having her work removed from the Alliance Francais of San Fransisco because of it's political volatility her work may now be viewed online or at the National Museum of Women in the Arts in Washington D.C. where her work is part of their permanent collection. Several of Worthington's works are also showing in NYC exhibits: Art Against War poster show in 2 sites from June 9-27th 2003: NY Arts Space, Soho and the Macy Gallery, Colombia University.

Gut Reflections. Israel. Palestine. 2002: Adi Yekutieli follows a familiar theme of his past work dealing with perception of history, colonialism, personal and collective memory, issues of identity, and the impact of occupation and oppression on the Arab-Jewish relationship. The installation is configured from 3 elements: 2 pieces of molded parts of the artist's body filled with raw cow guts; a series of 29 images consisting of some of the artist's art work done in the last 20 years (some of the art work he did with Arab communities in the last 6 years in Israel and Palestine, and some photos representing local reality). The last component presents fragments from an email exchange between Yekutieli and a Palestinian woman he met in Balata Refugee Camp. The correspondence starts in September 2000, a month before the outbreak of the Palestinian 2nd Intifada and ends in Spring 2001 with the death of Yekutieli's brother. April 6-18, 2002 at Adams House Art Space, Cambridge, MA.

A Chair is a Throne is a Freedom Fighter's Camp Stool: Jerri Allyn's traveling installation will be exhibited in New York Public Library Reading Rooms in all 5 boroughs (one month each) from April-August, 2002. The installation is made up of 21 artist designed chairs and stools that act as portraits of people who have resolved conflicts creatively and rendered thought provoking alternatives to punishment. CD disc-man's are in the design of every seat for the public to listen to stories, written and narrated by Allyn, with soundscapes by award-winning Radio Producer Helene Rosenbluth.

Chadoor Study: Iranian-born Gita Khashabi's art exhibit examines the contrast between the bleak, black chadoor and the rich visual structures and decorative patterns of Islamic architecture and their written language. Khashabi has long been fascinated by the dichotomy between religious and social pressures, which shifted to repress all female expression as simultaneously the architecture began to display the beautiful and ostentatious structures we know today. Weekends in April 2002 at [email protected], Century City. Khasabi's performance piece, "Chadoor," was featured at the New Millenium Project: Response to Sept. 11th in Venice, CA. on Dec. 20, 2001.